By BreakingNewsChannel (self media writer) | 5 months ago 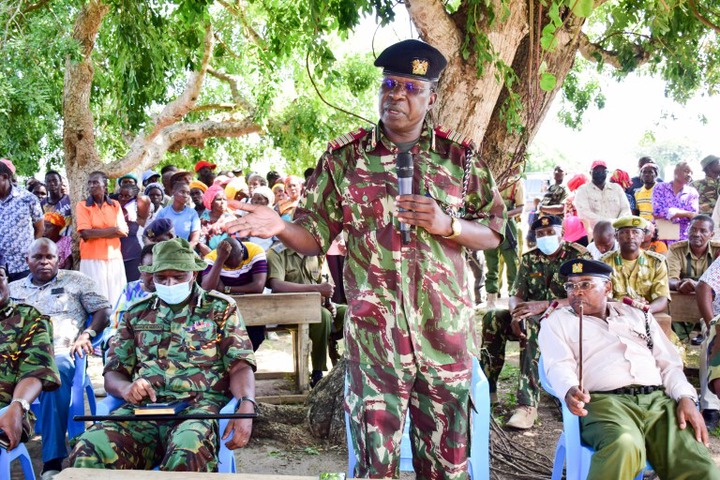 Coast Regional Commissioner John Elung'ata has ordered the immediate reopening of all schools in Lamu County West Lamu Sub-County after the national government deployed a multi-agency security team to restore normalcy In the region.

The security disruption followed an attack earlier this month by suspected al-Shabaab militants that left seven people dead, others injured and property destroyed after some houses in the sub- Lamu West County.

After the attack there was tension in the areas of Juhudi, Witho, Mashagoni Kamukunji in Majembeni and Bobo in Hindi Location, in the process many people left their homes and were accommodated in nearby schools.

The regional administrator also inspected an honor guard mounted by a National Police Reservist (NPR) who was deployed to hotspots in the villages that came under attack.

Speaking to the NPR team, Elungata urged them to strengthen security in the villages and cooperate with the residents and other national security organs in the county by ensuring the safety of the residents and at the same time collecting security intelligence on attack masterminds.

The regional administrator also organized a security baraza at Holy Primary School with local residents who were displaced from their homes after the attacks.

Elungata reiterated that adequate army and police have been deployed to deal with the assailants causing the insecurity situation in the region.

He urged residents to return home and there should be no cause for concern as the security loopholes have been identified and patched.

The RC further indicated that multi-agency security personnel have been put in place to protect families in Majembeni localities and urged them to return home after the improved security.

The administrator also ordered learning to resume on Tuesday next week in schools that were closed after students fled with their parents to nearby towns of Mpeketoni and Kibaoni.

The Regional Commissioner assured residents that security personnel will firmly deal with any criminals responsible for insecurity cases across the county.

He also called on residents to work closely with village elders and security administrators in voluntarily providing crucial information to enable the government to arrest the perpetrators.

He further called on security agencies to apprehend those who use social media to escalate tensions and cause animosity among locals.

"Let us all stand united and support the necessary action by the national government to bring back normality and we call on our people to desist from the divisive talks that will undermine the government's efforts to strengthen security," RC said.

Local residents led by Pius Mutie, Lamu West Constituency Director and Mkunumbi MCA Paul Kimani praised the government for their swift action to restore security to the affected villages and requested food to help them start a new lives in their homes.