Police officers from Mombasa are currently investigating an incident that happened today in the afternoon after a woman is reported to have collapsed and died after traveling all the way from Nyeri to Mombasa in order to go and seek special prayers from a renowned pastor who is based in Shanzu.

According to the reports given by a reliable source of information, it has been revealed that the deceased who has been identified as Grace Muchiri was waiting for the renowned pastor before she allegedly collapsed and died inside the church under unclear circumstances.

One of the witnesses who was at the scene of the incident has revealed that they were in church before they noticed that the woman Was having difficulty in breathing adding that before they could do anything to help her, she died on the spot forcing them to call the local authorities for more investigation.

"We were all inside the church, she was doing okay even through she didn't speak to anyone. She suddenly stood up and then fell on the ground. We tried to help her but it's like it was too late because she died before we could do anything", a witness said.

Reports given by one of the church members has revealed that the deceased woman had allegedly came to Mombasa seeking a special prayer due to her health which was allegedly getting worse day by day. The deceased, Grace Muchiri is reported to have had a painful experience with breathing problems that had troubled her life for a while.

However, according to the reports given by police officers who are currently investigating this incident, they revealed that they are currently looking into what might have killed her adding that they have already summoned the alleged pastor for more investigation and questioning. 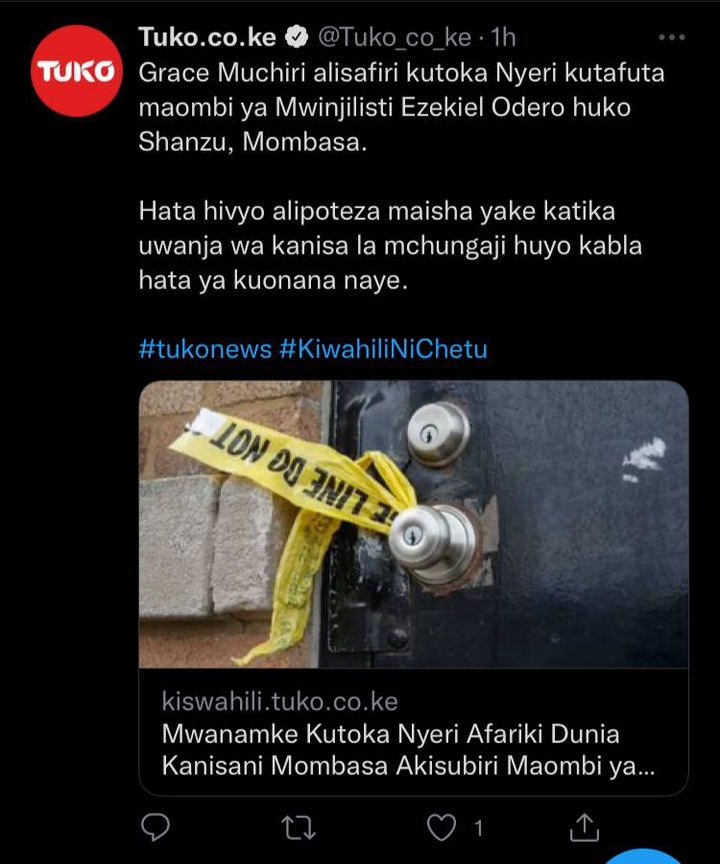 " Kumbe Ni Ukweli" If Baby Looks Through Their Legs, This Is What It Means

Signs Your Boyfriend Loves You More Than A Friend

Signs A Man Has Fallen In Love With You Deeply

Horrifying Moments as Househelp Mauled to Death by Employer’s Dog