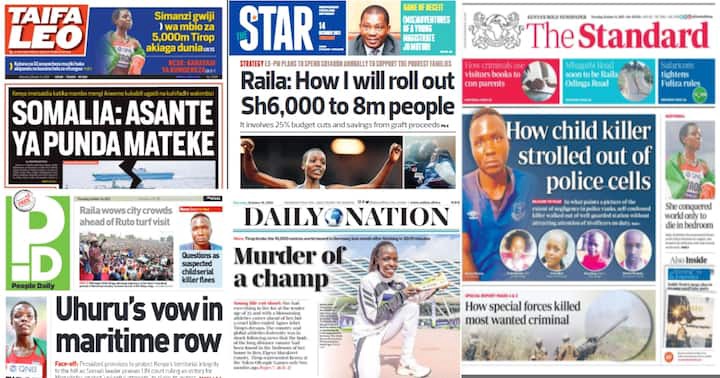 The country’s top newspapers on Thursday, October 14 widely reported on the death of athlete Agnes Tirop who was discovered dead in his her house with multiple stab wounds.

The newspaper reported on the death of Olympian Agnes Tirop who is believed to have been stabbed to death.

The body of the budding athlete who represented Kenya at the Tokyo Olympics was discovered inside the bedroom of her house in Iten, Elgeyo Marakwet county.

Following the discovery, it was established that Tirop’s husband, Emmanuel Rotich was missing and the police are treating him as the prime suspect.

Aspiring president and ODM leader Raila Odinga has disclosed how he would execute the KSh 6,000 monthly stipend if elected the Head of State.

Speaking recently, the ODM leader said the money will be given out each month to the most poorest households, adding that it is set to roll out as cash transfer programme.

According to the daily, fresh details have emerged on how self-confessed serial child killer, Masten Wanjala escaped from police custody at Jogoo Road police station.

The newspaper reported that the suspect managed to pass through the report desk without attracting attention from 10 police officers who were on duty.

Police now believe that Wanjala managed to escaoe when a group of people arrested for violating COVID-19 guidelines were being released.

The window to his cell was not broken and neither was the door which can only be locked or opened from the outside.

According to the Swahili publication, a man has been sentenced to five years in prison for forging a death certificate of his cousin and conning Britam Insurance KSh 500,000.

Solomon Kyalo was accused of forging the death certificate of Mutisya Musyoki who had a cover with the insurance.

Previously, Kyalo has also been arrested for trying to steal KSh 250,000 from Faulu Bank using the same document.

The maritime war between Kenya and Somalia threatened to boil on Wednesday, October 13, after the two nations adopted hardline positions on the matter.

President Uhuru Kenyatta vowed not to cede an inch of Kenya’s territory saying as the Commander-in-Chief of Kenya Defence Forces, he will deliver the country intact and encumbered to the next president.

His Somalia counterpart Mohamed Abdullahi Mohamed alias Farmaajo, on the other hand, hailed the judgement delivered by the International Court of Justice as a victory for his country against the unlawful attempt by Kenya to claim its territory.

Naivas In Family Dispute Over Billions