By Valentino_Ma'ko (self media writer) | 4 months ago 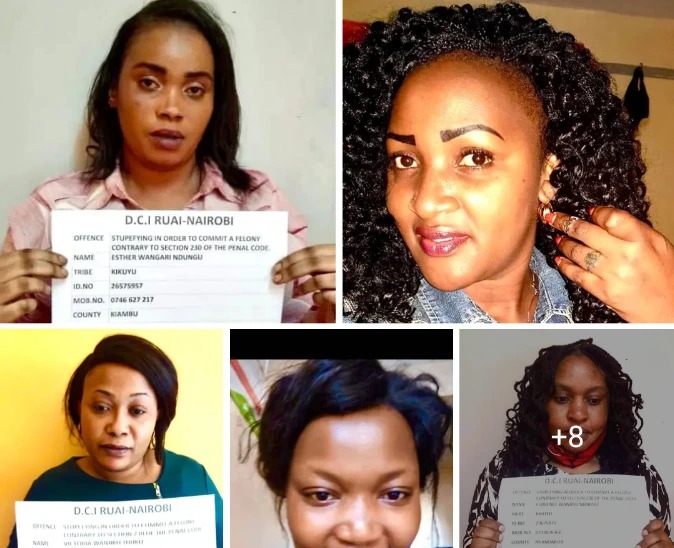 The Directorate of Criminal Investigations (DCI) has surfaced the photographs of 12 beautiful women who are allegedly part of the Mugoh's gang. The women's way of making money involved drugging Unsuspecting male customers and then emptying their bank accounts and other digital accounts.

Following the DCI statement, the female crooks would check their victims based on the type of drinks that the customers ordered, the dress codes, and even the motor vehicles they drove. They would then lure middle-aged men whom they called 'Wababas' with the aim to try their luck.

DCI added that a lot of these women have had a couple of run-ins with the rule of law but managed to evade prosecution. Their benefactor, and employer Mr. Mugoh Muvota was their guardian angel who bailed them out quite a number of times.

Muvota avoided court cases by approaching and refunding the victims who were duped by the syndicate. However, most of the victims avoided police cases because most of them were married and had big names in society, so they wanted to avoid problems with their spouses and the public.

Mugoh was assassinated on Monday along Mirema road in Nairobi after allegedly coming to a crossroad with his second in command, Dennis Karani Gachoki who is currently missing.

The DCI stated that the 'Pishori gang' is now missing a leader and most of the ladies have run away from the city to unknown areas, where they are watching the current unfolding incident from afar. The DCI added that the city is now under surveillance and the culprits better watch their moves very carefully.

Big clubs and bar owners have been advised to be on the lookout for such suspicious women looking to take advantage of unsuspecting customers and forward them to law enforcement.

Content created and supplied by: Valentino_Ma'ko (via Opera News )