By KrimeExpert (self meida writer) | 28 days

Police officers from Muranga are currently investigating an incident which reportedly happened today in the morning after the body of a middle-aged woman is reported to have been found dumped near a school.

According to the reports given by a reliable source of information, it has been reported that the Lifeless body of the deceased was allegedly found today on the morning by one of the locals who immediately alerted other residents.

Giving their reports, police officers who responded to the incident after being alerted by one of the locals have revealed that the deceased might have been Murdered elsewhere before being dumped near the school.

This came after the findings made by police officers who toured the crime scene adding that there was no blood around the body of the deceased. At the same time, they revealed that the deceased had been cut into three pieces for unknown reasons.

This incident has however sparked alot of reactions from Kenyans who seemed to have different opinions and suggestions on the matter and on what should be done in order to reduce the number of disappearances and murder in Kenya.

In the past few days, Kenyans have been reporting cases of missing relatives who either turn up dead or are never to be found and so due to this reason, Kenyans have called upon the director of criminal investigation to look into this before things get out of hand. 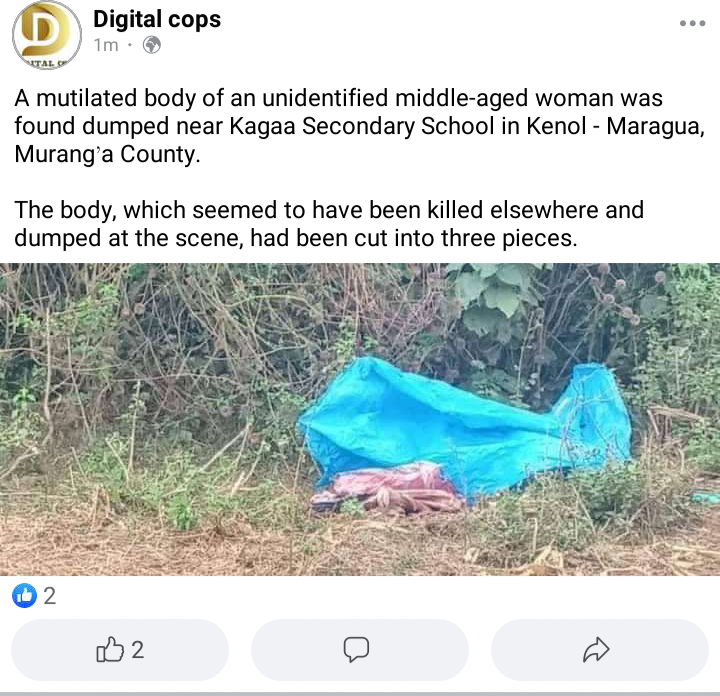 While reacting to these cases, the inspector General of police, Hillary Mutyambai revealed that they have allegedly formed an elite group of police officers who are currently investigating this incidents in order to find the syndicate behind this.