A family in Kisii has pleaded with Kenyans to assist them in raising money so they may fly back their ailing relative who is stranded in Saudi Arabia.

After failing to find employment in Kenya, Annet Makini left for Saudi Arabia through a recruitment agency in August of last year. 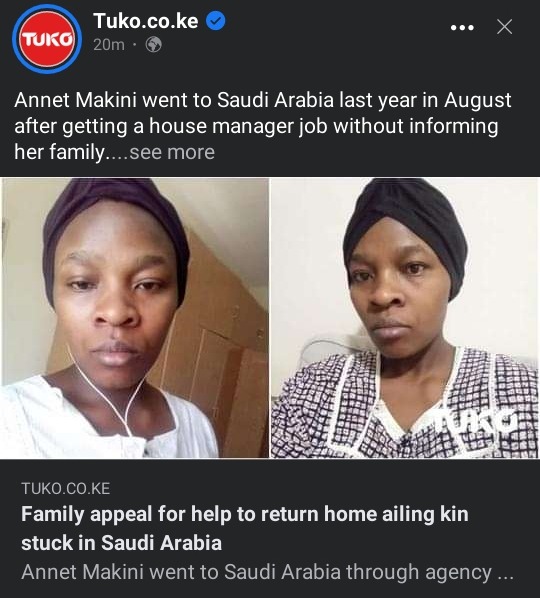 Makini, who is an orphan, reportedly left for the Middle Eastern nation without alerting anybody in her extended family, according to her cousin Machuki Caroline.

After Makini gave birth, Machuki claimed, she left the house under the pretext that she was going to stay with a friend, which is how she ended herself in Saudi Arabia secretly.

The woman claimed that up until June of this year, when someone saw Makini on YouTube pleading for assistance to get home, they were aware that Makini was residing with a friend for that entire period of time.

She texted her to ask whether it was true that she was trapped in Saudi Arabia because she didn't believe it.

Later, when he arrived at the station after being called, her boss told the cops that Makini was an employee of his and that he also employed Saher. The police then instructed her to go back to her boss's residence, saying they would look into the dead man's death.

Everything was Oay, according to Makini, until one day when her child's supervisor instructed her to see what her parents were hiding within.

After that, her employee began abusing her and overworking her despite being aware of her illness. She claimed that, after what she saw in that house, the 23-year-old woman is terrified for her life.