A woman arrested by DCI detectives for accusing her area chief for raping her in Kimasian location, Kericho County.

The suspect identified only as Mercy is said to have falsely accused her area chief of raping her, after her spouse found out that the duo have been having an illicit sexual affair.

Multiple cases filed lodged at Londiani police station on Tuesday afternoon, the lady from Kimasian location who was together with by her spouse said that the local administrator raided her house later in the day and flushed her out of the house.

She further disclosed that when she declined, the local administrator then dragged her into a bushy maize farm and raped her severally. Detectives swang into action following several allegations lodged against the area chief.

The Londiani based detectives found out that Mercy and the local administrator had been involved in an illicit love affair for time.

On the day the chief is accused if raping the woman, the two were in a heated charts and had planned to meet at their normal meeting point. “Let’s meet hapo mahindi yenu,” read one of the messages sent by the Chief on Sunday. 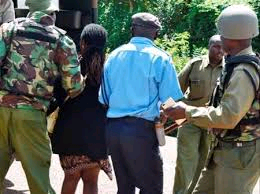 It is these hidden texts and others dating as far much back as August, that Mercy’s husband stumbled upon, and discovered that his wife had been secretly having steamy encounters with the chief in a nearby maize plantation, that provided perfect cover for their illicit activities.

In order to get back at the chief, Mercy was compelled to file a trumped-up report against him, in a case that has attracted a lot of interest in Cheptagulgei village.

However, after detectives conducted their detailed analysis and investigations including a visit to the alleged scene of the incident, they discovered that Mercy’s claims were inconsistent and not supported by facts at the scene.

The investigators also retrieved Mpesa transactions detailing how the woman had been receiving money from the chief after every illicit encounter they had, since August . These among other revelations in the possession of our detectives, seriously casted doubt on the woman’s allegations that the Chief had indeed brutally dragged her into the maize plantation and forced himself on her. 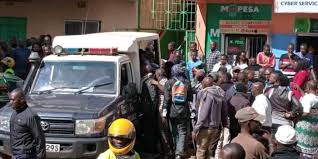 This is to advise members of the public that rape is a serious offence under the sexual offenses act, that attracts a heavy penalty of up-to life in prison.

While we encourage victims of any form of sexual abuse to make their reports for our immediate action, we equally caution the public against making false allegations against any individual to get back at them. 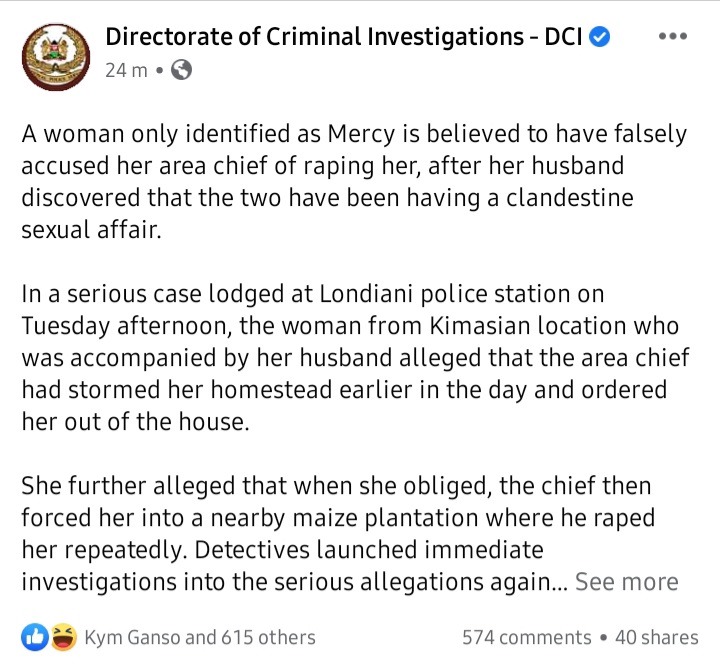