By Confessions2 (self media writer) | 25 days ago

Police officers from Thika have arrested a man who is reported to have gone missing moments after his wife passed away in the hospital where she had rushed to to seek treatment.

Due to this reason, Police officers launched a man hunt for the 24 Year old suspect who was arrested in a dramatic scene. The suspect who has been identified as James Gicheru was taken to the police station for more investigation and questioning over his wife’s mysterious death.

The deceased who was taken to the mortuary is reported to have been a young mother of six who has left her children behind. Officers who are currently investigating this incident have called upon residents with any information to contact them as soon as possible.

While reacting to this incident, Kenyans have been urged to find an alternative way of solving their differences instead of killing each other. At the same time, the government has revealed that its currently recording an increasing number of murder in the country at an alarming rate. 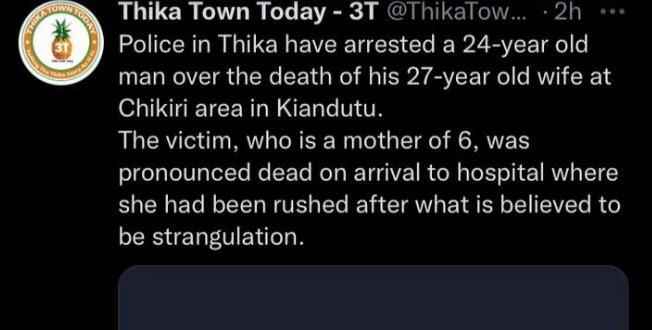