By TheKenyasNews (self media writer) | 7 days ago 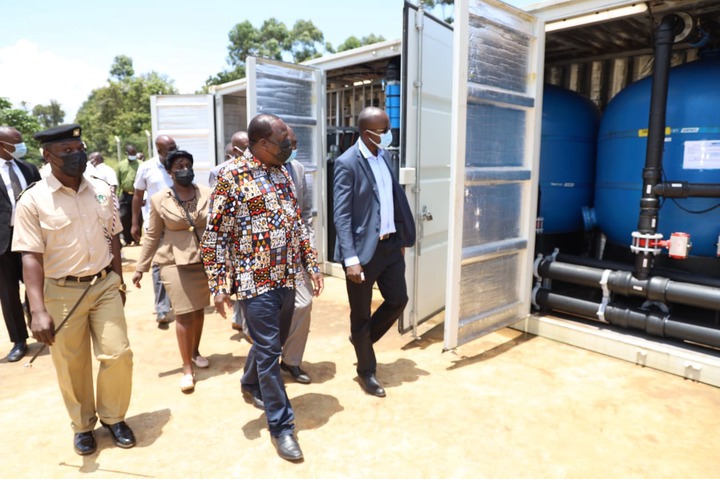 The Kakamega County Government is putting up a major water project that targets 22,000 local residents.

Governor Wycliffe Oparanya said the project being put up at Chekalini in Lugari Sub-County would cost Ksh. 100 Million.

Oparanya said the project would mostly benefit residents of Chekalini and Lugari Wards.

Speaking when he inspected the construction works, the governor said the Plant would be ready by December.

He said the funds were spent on construction of Chekalini dam and installation of state of the art machines imported from Australia and a transformer for supply of electricity.

"Water is drawn from the dam to the Plant which is automatically purified by machines before it is supplied to the residents. We will not use workers to purify the water as the exercise is done automatically by machines," said Oparanya.

"The machines we have installed were imported and are the best. The project will resolve the perennial water shortages that the residents have been experiencing once it is operationalized at the end of this year," he added.

He said more machines had also been ordered and would be installed at the site before the project was complete.

The governor said residents living around the water project would be connected to the national grid from the transformer.

"By the time I come to commission this project, all the residents living around here should have been connected with electricity," he added.

Oparanya said similar projects would be initiated in the other eleven sub-counties to boost supply of clean piped water and ensure majority of the residents have water at their doorsteps.

He pointed out that the move was aimed at achieving his promise of supply of clean and piped water to a majority of the residents.

He said the locals would be employed to work at the Chekalini Water Project.

Oparanya said water was an essential commodity and that he had elaborate plans to ensure that the commodity was easily available to the residents.

He further said he had stepped up public participation meetings with the residents to share with them his development agenda and enable them be part of decision making in development programmes initiated by the county as required by the Law.

He added that he had so far held such forums in Butere and Likuyani.

Content created and supplied by: TheKenyasNews (via Opera News )