By kenya.newszjunky.co.ke (self media writer) | 10 months ago 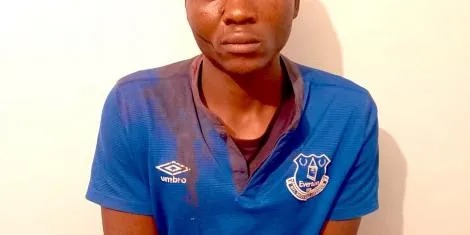 Detectives drawn from the Directorate of Criminal Investigation (DCI) have nabbed a kidnapper who has admitted to having killed 10 children in cold blood.

The self-confessed murderer is reported to be behind the disappearance of two children in Shauri Moyo, Nairobi.

The 20-year-old Masten Milimu Wanjala shocked detectives when he confessed to kidnapping 10 children and later executed them in cold blood.

The suspect revealed to the detectives that he is behind the killing of Charles Opindo Bala,13, and Junior Mutuku Musyoki, 12, who disappeared on June 30 and July 7, 2021 respectively.

After his arrest, Wanjala led detectives to the scene of the crime where he had disposed of the bodies of the children in Lower Kabete.

Before he was nabbed by the detectives, Wanjala had contacted Musyoki’s mother Felista Wayua, demanding a ransom of Sh50,000 in exchange for her son’s freedom.

One of the parents, Opindo's father Tony Opindo, whose son never returned home from Sagaret Primary School in Majengo, was asked to send Sh30,000 to buy his son’s freedom.

The detectives are currently interrogating Wanjala who is supposed to give more information that may lead to establishing the whereabouts of the other children he is believed to have kidnapped and executed.

DCI has since appealed to members of the public to offer any information that they may have concerning the suspect.