Banisa police Boss Mr Khamasi Shivongo has confirmed that suspected Al shabaab miltia have attacked two buses along Ola and Sarman in Mandera county where by several police officers were injured after confrontation with miltants during the attack.

According to Witinesses the driver of the bus tried to speed off from the scene inorder to escape the terrorists but ultimately injured some passengers as the bus overturned. Sources have confirmed that around ten passengers have been injured.

Senior assistant General of police Miriam Muli has confirmed that five police officers were injured during the attack, "The ambush wich took place at 6 A.m in Banisa during a routine border patrol has left five of our officers injured and they are currently receiving treatment" Muli stated.

The news comes as insecurity withn Mandera county has been growing concerns among the residents. Few days ago three police officers who were on patrol were killed after being attacked by Al shabaab miltants. 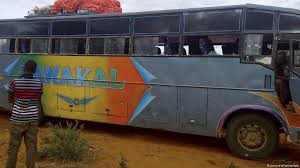