By Abedysingoe (self media writer) | 7 days ago

Mungiki gang was known for causing chaos in the country, leading to murderous police crackdowns.

The membership rules of the Mungiki gang were simple: If you talk about it, you die. If you try to leave it, you die. The fear of the mystery surroundings its membership made this cultish Kenyan mafia group grew.

But what is certain is its past is soaked in blood. The gang's roots go back to a small minority who were fighting to survive tough economic times and persecution.

Theirs was to spill blood. They could kill without mercy. 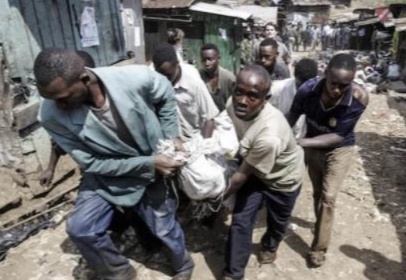 In of April 20, 2009, 29 men from Gathaithi village in Nyeri were butchered in cold blood by Mungiki sect members in a revenge attack. The bodies were left scattered along the walking paths. 11 later, details of the incident are still fresh in the minds of the families that remain bitter, poor and traumatised.

Though they are yet to recover from the massacre, Esther Wangui, Faith Muthoni and Macharia Muriuki have since forgiven the assailants, but they will never forget the events of that fateful day.

“We live in fear of another attack because most of those we know were behind the night raid escaped to unknown destinations and were never arrested. Others are still here,” says an elder, fearful to go on record. 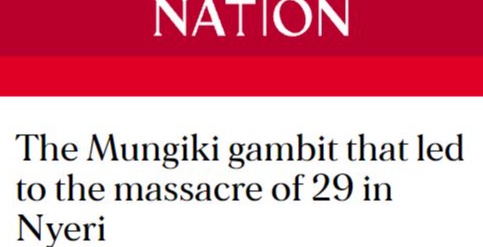 The mass murder came after days of tension in parts of Kagumo and Karatina where about 15 suspected Mungiki members were lynched by the public over harassment and extortion. This was also a time when the government had heightened crackdown on Mungiki in the region.

“That group subjected us to the worst economic torture. It had established an illegal tax system and imposed it on the residents. It would collect household and domestic animal taxes and demand for protection fees. When a man received his daughter’s dowry, members of the sect demanded their cut,” narrates the elder, 75.

They ate and defiled women

Farmers selling five litres of milk per day remitted one to the gang. The gang would also storm houses at night randomly, demand supper and after filling their stomachs, [email protected] the women in full glare of the husband, he goes on.

It was this harassment and the gang’s brutality meted against those opposed to their activities that led to the lynching of the 15. Before the Gathaithi massacre, suspected Mungiki members had regrouped and planned revenge attacks.

That night, Mungiki adherents, posing as members of a vigilante group that had carried out the lynching, combed the entire Gathaithi village mobilising their members to keep vigil over an impending attack. 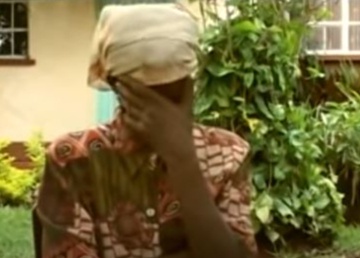 Unaware they had been duped, the villagers agreed to keep vigil. Those who turned up for the vigil were vetted at Kiaruhiu shopping centre in a process dubbed ‘andu mamenyane’ (let people know each other).

It is during the “vetting” that six villagers were discovered to belong the vigilante group and summarily executed by Mungiki.

After their execution, the Mungiki adherents, in their dozens, walked back to Gathaithi village and stormed the homestead of Esther Wangui, who had employed two farmhands from Kirinyaga County where majority of the vigilantes hailed from.

The two were also hacked to death.

“My sons would also have been killed; it is only that they were not around. The attackers shattered window panes of my house and ordered me to open the door. They found no man in the house as my husband had passed away,” Wangui emotionally recounts.

She was ordered to go back to bed as the sect set on fire a house where one of the farmhands resided. One of the workers was killed near a cowshed while the other was hacked inside the house and his body burnt beyond recognition. “It was about 3am.” Another set of attackers was hiding by the roadside near Wangui’s home armed with machetes. 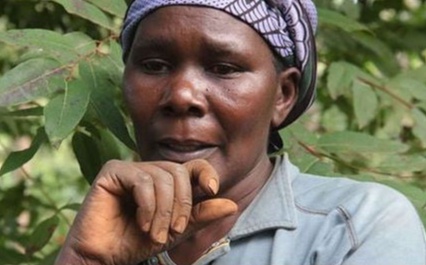 “They set the house on fire as a trap to attract other villagers. Neighbours responded to our screams and distress calls. They were ambushed at their gates and massacred,” she narrates. The assailants later vanished in darkness.

Faith Muthoni Thairu, whose husband Peterson Thairu Gichuki was among the victims, describes the incident as terrifying.

“When I saw my husband’s body among those lying on the road, I became unconscious. It hurts me because I am poor and my children cannot access better education. I know that if he was alive I would not be struggling,” she says.

“My husband was picked alongside his brother Daniel Mwangi Gichuki. When they were called, they never resisted because those who called them were people well-known to them,” says the widow.

She was left with three children, the youngest was four years old. “The eldest has since dropped out of college for lack of fees. It is his second year at home. Many a time we spend the night on empty stomachs,” she says.

Found in the bushes

Macharia Muriuki was lucky. He says he survived the attack by the grace of God. He was found unconscious in the bushes with severe injuries.

He was also picked up at home by the disguised Mungiki followers. “I am told I stayed in Intensive Care Unit for more than six months. I bled profusely. The injuries on my head and neck can tell you the attacker was out to finish me,” he says.

“One member of that group committed suicide. Others sold their land and left. Some of those arrested were later released. Police never questioned me after I was discharged from hospital,” he says.

The residents opposed the reconciliation efforts initiated by the late Bethuel Kiplagat-led Truth Justice and Reconciliation Committee on grounds that the members of the gang never confessed to committing the massacre. 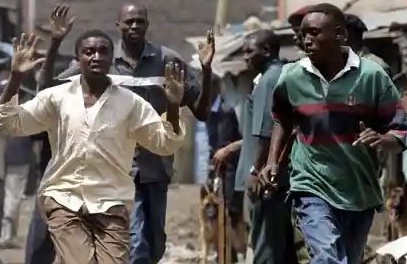 “We could not reconcile with faceless people. Mungiki members who carried out the attack or their leaders would have been brought to us to confess so that we can reconcile,” says Mr Macharia.

“The families of the victims were promised help such as financing of their children’s education. Nothing came forth. The government only funded the burials,” says the elder.

“The residents still suffer from trauma. We would like to have a human rights lobby group assist us in pushing the government to compensate the families."

Later, police arrested 23 people suspected to be members of the sect. But the government was unable to prefer murder charges against them; they were charged with conspiring to commit a crime.

A magistrate’s court in Nyeri found them guilty and handed each of them a seven-year jail term.