By KrimeExpert (self media writer) | 24 days ago

Police officers from Kilifi are currently investigating an incident that happened today in the morning after the lifeless body of a man and a woman is reported to have been found dead in Mombasa. In a news report that has been shared by a reliable source of information, it has been revealed that the man and woman all of whom are believed to have been dating and at the same time, living under the same apartment before the incident.

According to the reports given by the police officers, they revealed that they were forced to rush to the crime scene after being alerted by the gate man who allegedly saw the two bodies of the deceased on the ground after they allegedly came from the sky.

The first witness, a watchman said that he was forced to run to the police station after he heard two loud thuds coming from the back of the apartment where he went only to find the bodies of the man and woman after they allegedly jumped to their death.

Police officers who arrived at the crime scene revealed that they were able to find the body of the deceased after which they went to their house where they found a number of things indicating that they two had been fighting.

While reacting to this incident, a number of kenyans claimed that the two might have been using drugs adding that it was so unfortunate that they had to die in this kind of manner.

According to the reports given by most Kenyans, they claimed that no one is his right mind would have done such a thing especially after one of them died moments before. However, others went ahead and claimed that maybe the two had some type of blood related ties that led to this. 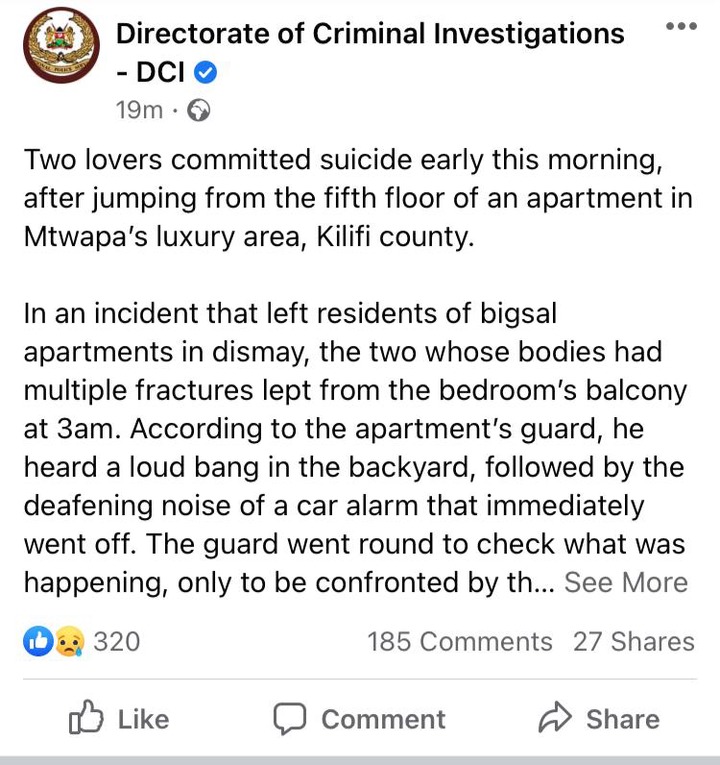