Police officers from Kerugoya in Kirinyaga are currently investigating an incident that happened today in the evening after the lifeless body of a man is reported to have been found dumped in one of the local rivers.

In a news report that has been shared the People's Daily, it has been revealed that the body of the deceased was found by one of the locals who had gone to the river only to find the man's Headless Body floating on the river.

The witness immediately alerted police officers who responded swiftly after which they took the body of the deceased to the Mortuary awaiting postmortem services.

While reacting to this incident, police officers from Kirinyaga have revealed that the deceased was Murdered Several days ago due to the fact that his body was already decomposing. At the same time, they revealed that they are currently waiting for the postmortem results in order to find out who he is.

In the past few months, a number of kenyans have been reported missing under unclear circumstances. According to the reports given by the Kenya Police Force, it has been revealed that the rate of abductions and disappearances in the country have already surpassed the number of victims who were reported missing in the last two years.

Due to this reason, kenyans have been urged to make sure they are extra careful. At the same time, the inspector General of police, Hillary Mutyambai has called upon kenyan parents wanting them to make sure they stay vigilant and look after their children during holiday seasons.

Hillary Mutyambai who expressed his fear and concerns said that most parents are not watchful or their children adding that this is why some of them often find out that their children went missing close to 12 hrs after their dissappearance. 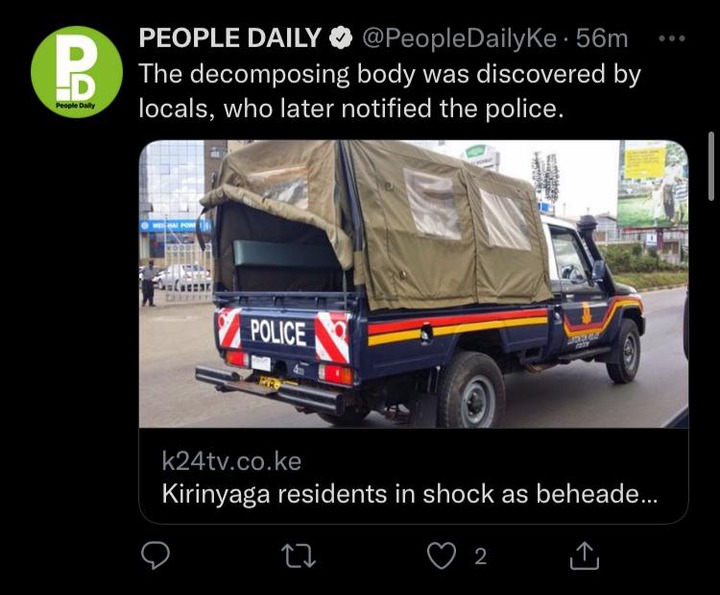