South Africans Arm Themselves as State Pursues Instigators of Unrest 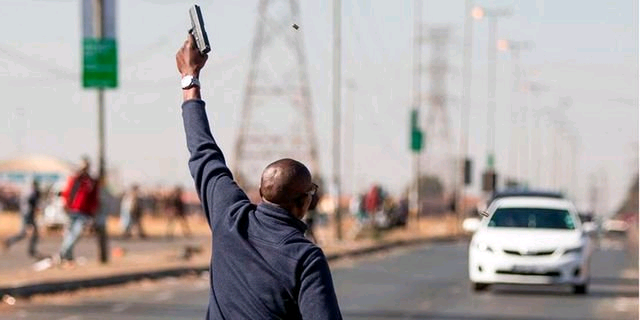 A man fires a hand gun in the air to disperse a mob of alleged looters outside of the Chris Hanni Mall in Vosloorus.

South African authorities are slowly establishing law and order after nearly three days of rampant looting, with President Cyril Ramaphosa saying Wednesday that he may deploy more troops on the ground, even as citizens in areas hit by waves of unrest formed defence units to protect malls and shops.

This comes after what began with sporadic incidents sparked by the jailing former President Jacob Zuma last week had by Sunday turned into spontaneous mass looting.

Overnight in Cape Town and other cities around the country, ad hoc groups of citizens, many armed, as well as security companies and crime watch groups, had gathered to protect malls and shops from looters.

Organised taxi groupings have also come out to denounce the chaos and are attempting to impose order in their ranks as well as surrounding business areas.

At the same time, the government is reportedly hunting down alleged instigators of unrest, including controversial former head of the State Security Agency's rogue special operations unit, Thulani Dlomo.

A suspected looter is arrested by a group of community vigilantes outside the Chris Hanni Mall in Vosloorus, on the northern outskirts of Johannesburg, on July 14, 2021. Photo credit: AFP

Officially the death toll was given as 72, but analysts indicate that this may be higher, with one TV news crew encountering a dead body while covering looting which had continued overnight, especially in Soweto on the outskirts of Johannesburg.

Police Minister Bheki Cele said majority of the dead had been trampled on.

Hospitals in Johannesburg, Durban and other affected areas were filled with injured people, some with wounds from rubber bullets fired by police but most being victims caught up in the unrest.

During the height of the looting over the last 48 hours, thousands of people swarmed major malls, warehouses and shopping centres, stripping them of virtually everything.

Despite preparing for some known planned 'protests' following Zuma's jailing, police and authorities were seemingly caught unawares by the scale of unrest after masses of South Africans picked up where organised criminal groups had left off following initial protests on Saturday.

More than 1,200 people had been arrested by early Wednesday, with many more detentions yet to be reported.

Minister Cele said those organising targeted attacks against infrastructure, such as power transformers and cell phone base stations, over 100 of which were attacked, were committing crimes "against the state" and that this was taken very seriously.

He re-iterated that police were looking at a list of people who they were aware of as playing key roles both in driving protests and looting, which he said was a smoke screen for something much more serious.

"The agency is riddled with Zuma factional types. It is a shadow of its former self and had obviously lost its capacity to proactively know what is likely going to happen," the source said.

"Many in the agency were involved political factionalism and as a result, it has taken its eye off the national security ball, suffering in its ability to gather pertinent information to protect the state and its citizens," said the source.

This expands upon admissions by the State Security Minister on Tuesday that there were rogue elements in the agency involved in stoking unrest and who were "being looked into".

With a slow return to normalcy underway, Durban has begun to count the cost of three days of looting in the key port city.

Durban's authorities said damage in the city alone was estimated at $1.5 billion, with 55,000 informal businesses affected.

Reuters reported that some wealthy residents have chartered small planes and helicopters out of the city.