By TelegraphKenyanews.co.ke (self meida writer) | 27 days 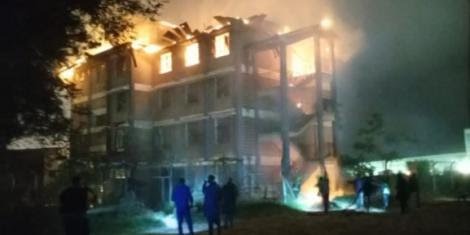 Fire broke out at a four-storey dormitory building inside Highway Secondary School along Mombasa Road in Nairobi.

The incident occurred on the night of Sunday, June 27, with witnesses noting that the entire top floor was completely burnt down.

A series of clips seen by Kenyans.co.ke showed a huge flame engulf the building as fire fighters tried to put out the fire.

It is not clear what caused the fire, the value of the property destroyed as well as if there were any casualties from the incident.

"The fire was so huge. Even the other side was burning but the firefighters managed. There was a time there was a huge fire.

"I heard noises and people were making hitting sounds. Now they have managed," stated a neighbour.

The school has had a history of arson mostly in its dormitories with some past cases being ruled as planned attacks by some students from the school.

In July 2018, the school was closed indefinitely after an arson attack. Suspected arsonists were targeting to burn down a dormitory by setting six mattresses on fire.

At the time, 31 students were rushed to the Kenyatta National Hospital (KNH) after a fire broke out at the school dormitory.

Reports at the time indicated that a majority of the students are being managed for smoke inhalation and soft tissue injuries sustained during the fire.

Sources indicate that a quick response by a Kenya Red Cross team helped in containing the inferno.

Details Of Progeria The Disease Suffered By Grand P, As His Hubby Eudoxie Announced Their Break up

It Has Ended in “Premium Tears”, Ivorian Socialite Eudoxie Yao's Relationship with Grand P is Over