By FinestISAAC (self media writer) | 1 month ago 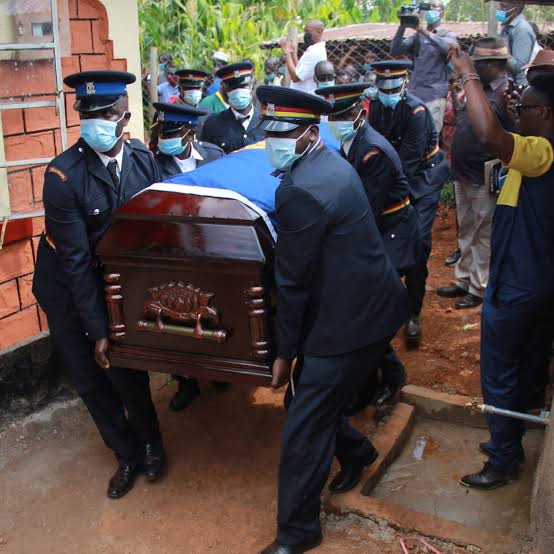 A community of police officers who were observing tradition of laying to rest one of their own were today forced to to load the casket of a senior retired officer into a standby police Land cruiser and driving away after supporters of DAP-K and Ford Kenya partys caused chaos in Bungoma.

During the ceremony held at Matumbufu primary school, Bukembe West ward in Kanduyi, all was well until the area MCA invited Ford Kenya candidate for the Kanduyi constituency seat, who is also a former speaker of Bungoma county assembly, Mr. John Makali to speak.

John Makali speaking to the press after the ugly incident.

The burial would later proceed after normalcy was restored, with area police commander, Benjamin Kimeli blaming politicians from hijacking the event and disrespecting the mourning family.

Commenting on today's happenings, Mr. Makali blamed his competitor, Wamunyinyi for all that happened urging the police to investigate the incident expeditiously and arrest the perpetrators of the violence which he termed as 'archaic methods of scaring voters'.

"It is regrettable that Hon. Wamunyinyi can conduct himself in the most undignified manner, the melee resulted to numerous Injuries and a disorganisation of the funeral service.I urge the police to investigate the incident and arrest the perpetrators of such archaic methods of scaring voters.We call upon the IEBC to take firm action on such occurrence." Makali said

Content created and supplied by: FinestISAAC (via Opera News )