By Githuria.co.ke (self media writer) | 7 months ago 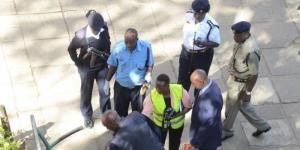 A Form Four boy was beaten to death at Komothai Girls Secondary School in Kiambu County after leading a group of male students into the institution.

The incident occurred at 4:17am on Thursday morning, October 21, as detailed in a police report filed at Kibichoi Police Station in Githunguri Sub County.

The 17-year-old deceased was reported to have guided five other male students from Gathiruini Boys High School to sneak into the neighbouring girl’s institution.

However, the eyewitnesses did not explain how the boys found their way into the school.

“They had escaped from their school and trespassed into ours. Some people sighted them at Phoebe House - the dormitory for girls,” a security guard, who reported the incident at the police station, recalled.

He added that the targeted girls screamed and attracted the attention of the security guards, and the teacher on duty, as well as the headteacher.

On realising that a plot they believed was well-oiled had been foiled, the six school boys scampered for safety.

Five of them seemingly recalled their escape plan and sneaked out of the school with a mob comprising of students and staff baying for their blood.

The five escaped uninjured and left their Form Four colleague at the mercy of the agitated mob.

“The teenager was beaten by the students and staff and sustained physical injuries on the head and forehead."

“He was rushed to Kigumo Level IV Hospital in an unconscious state but died while receiving treatment,” an excerpt of the police report reads.

The body was ferried to Kigumo mortuary where an autopsy will be conducted to ascertain the cause of death.

A team of detectives led by the Kibichoi Officer Commanding Police Station (OCS) visited and documented the crime scene. Murder weapons comprising of stones and sticks were recovered as investigations into the incident commenced. 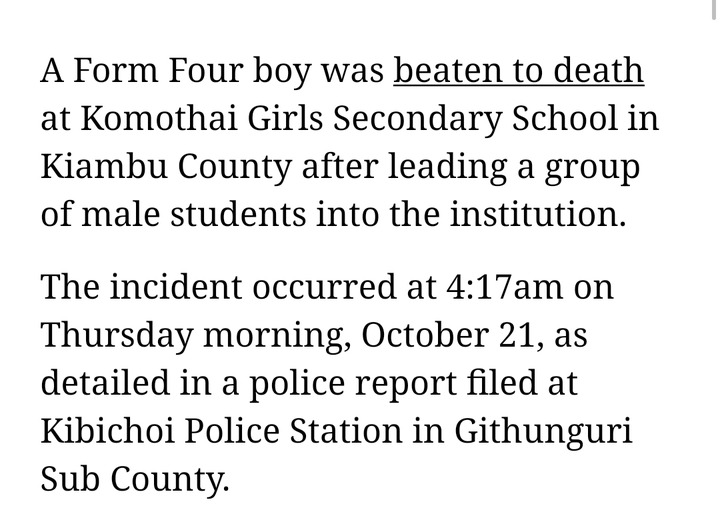