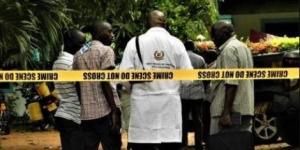 The autopsy of a boy who was allegedly lynched after sneaking into Komothai Girls Secondary School in Kiambu County has been released revealing new details.

The forensic examination conducted on the body of the deceased at the Kiambu Level IV Hospital on Friday, October 22, established that the 17-year old had a fractured skull. Other than that, he also had broken limbs and an array of other superficial visible injuries.

The pathologist report concluded that the boy had died as a result of a blunt forced tremor to the head.

The family, who gathered at the facility to find out the real cause of their son's death, were left with many questions than answers.

They are now castigating the school, especially the security sector, for failing to safeguard the students thus making it easy for them to sneak out.

The distressful mother is also blaming the security of the girls' school for accosting the boy leading to the alleged lynching ordeal.

Investigating officer, Michael Kimilu, has already recorded statements from several witnesses who reportedly were at the scene of the crime. He has, however, sent a warning to the members of the public against taking the law into their own hands.

The deceased was reported to have guided five other male students from Gathiruini Boys High School to sneak into the neighbouring girl’s institution.

Five of them seemingly recalled their escape plan and sneaked out of the school with a mob comprising of students and staff baying for their blood.

He was allegedly beaten to death and the incident was reported at Kibichoi Police Station in Githunguri Sub County.

“The teenager was beaten by the students and staff and sustained physical injuries on the head and forehead."

“He was rushed to Kigumo Level IV Hospital in an unconscious state but died while receiving treatment,” an excerpt of the police report read.

The mother, however, contradicted the report indicating that the boy might have jumped from the fourth floor of the building.

"I have seen the body of my son, and I am so saddened. The injuries on his body do not show any [signs of] beatings, but the ones on his head shows he died from trauma,” the mother told the Standard.