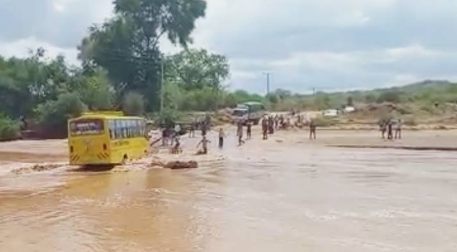 Amani National Congress party leader Musalia Mudavadi is among the latest national leaders who have send their condolences to the families and friends of 23 people who have lost their lives in Mwingi, Kitui County after the bus they were traveling in plunged in to flooded Enziu River.

In his condolence Message, Mudavadi laid the blame to the driver who has since been identified as Brother Kangethe for failing to exercise more patience.

"It's sad that many lives were lost due to a human error, which could have been avoided had the driver exercised some patience and caution," read part of Mudavadi's tweet. 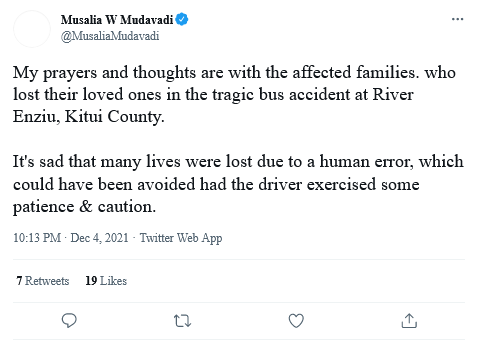 According to several witnesses and residents who have spoken to a number of media stations the bus was reportedly carrying 50 people who were going to attend a wedding ceremony of an old couple aged 70 years who were renewing their wedding vows.

So far 23 bodies of the Catholic Church choir members have been retrieved while 14 people were rescued alive with operations to remove the bus still underway.

Of the 23, 15 of them are allegedly from the same family with three children being among them.

Witness stated that the driver had waited for more than two hours to cross the river, and it was not until he saw other vehicles crossing that he tried his luck that has since left the whole nation mourning.

Jimi Wanjigi Talks About Night Raid at his Office