By RIFT.VALLEY.NEWS (self media writer) | 5 months ago 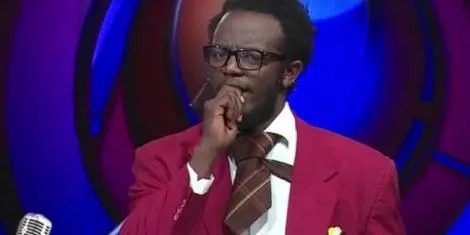 Former Hot 96 Presenter and comedian Herman Gakobo Kago alias Prof Hamo has warned motorists to be cautious while on the road after he recently encountered a near-fatal experience with a notorious highway gang.

Taking to social media to narrate the whole ordeal, Hamo detailed how on the night of Saturday, June 26, as he was heading home to Nakuru at about 11.30 pm, he spotted two suspicious bikes approaching him.

The riders along with their passengers kept urging the comedian to halt the vehicle. Hamo acknowledged that at first, he thought that there could be a problem with the vehicle and they were signaling him to stop and address it.Unsure of whether or not to trust the gang, he decided to keep driving.

"On reaching the KFA roundabout, I heard them calling for me to stop. I thought perhaps the boot was open, and that is why they were telling me to stop.

"However, when I looked in the rear-view mirror, I saw nothing was amiss," he stated.

According to Hamo, on reaching the Menengai roundabout, one of the motorbikes stopped in front of his vehicle prompting him to slow down.

The comedian pointed out that one of the passengers alighted and approached him seemingly with malicious intent. The passenger was about to reach for something in his jacket pocket when, in a split second, Hamo decided to swerve off and continue driving.

The former radio presenter acknowledged that the gang was relentless in their pursuit and engaged him in a high-speed chase on the highway.

He pointed out that as they approached another roundabout, he thought of joining the left lane and head to Kaptembwa Police station but resolved to continue heading straight as his vehicle was at high speed.

The comedian detailed that the chase concluded after he couldn't spot the gang in his rearview mirror. As he approached the Njoro turn-off, Hamo switched off the lights and waited a few minutes before resuming his journey.

"That was scary and traumatic. Be very careful on the roads. Do not stop for anyone unless they are police officers at a roadblock," he warned motorists.

The news comes as criminal cases involving muggings, kidnappings, robberies have become rampant within the country.

This has seen Kenyans, especially in Nairobi lament the state of prevalent crime as they decry constant attacks from perpetrators.

The uproar prompted the Inspector General of Police Hillary Mutyambai to form a special crimes unit in order to deal with criminal gangs within Nairobi and its environs.

Further, the DCI urged Kenyans to always file reports of such cases at police stations in order for police to carry out investigations and bring the criminals to book.