Man's body has been found by the roadside in Murang'a.

So far Mukuyu area chief Adams Kariuki has reacted to this scene.

According to Adams Kariuki, the body appear to have been dumped in the area from elsewhere.

Adams has also narrated the scene.

According to him, he received reports from a villager today in the morning.

At the time, Adams reacted by rushing to the scene.

At the scene, the body was naked but their was one shoe beside it. Afterwards, Adams called Murang'a police officers.

Note; Simon Njoroge, a resident of Kongoini who reported the discovery to his area chief has also reacted to this scene.

According to him, he discovered the body at around 0620hrs on his way to a neighboring shopping center.

At the time, the body was in a ditch on the side of the road. Afterwards, Simon called another man who was walking nearby to help him confirmed the body before reporting the scene to his area chief.

May the deceased rest in peace. 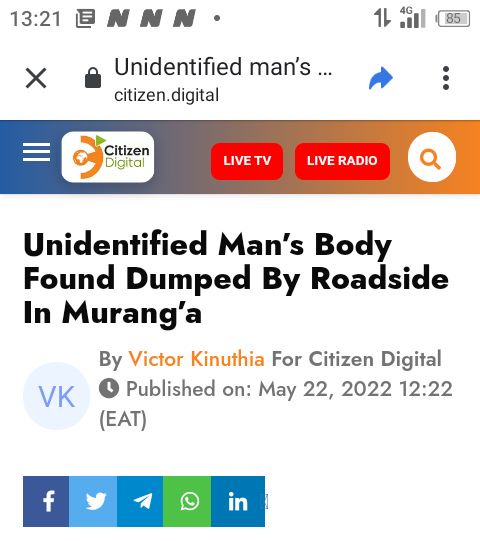