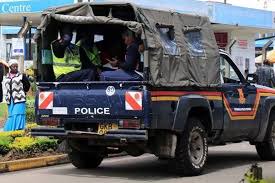 CCTV footage of the five armed robbers who on Wednesday, January 26 launched a daredevil assault on a local bank in Nakuru city and escaped with Ksh2.3 million has exposed a member of staff at the bank as one of the suspects.

This is according to a senior detective from the Directorate of Criminal Investigations (DCI) who added that they are still reviewing the footage and have since established that the heist may have been an inside job.

Detectives have since identified the faces of some of the suspects and have expressed confidence that they will arrest them. Additionally, recorded statements from the bank employees as well as the branch manager Suraj Rawal will help them in tracking down the suspects.

“We are still reviewing the CCTV footage obtained from the premises and we have established that the robbery may have been well planned. We have so far identified some of the faces of the suspects and we will soon arrest them.

“So far, bank employees, including the manager have recorded statements that will help us to arrest the suspects. We have so far made meaningful progress in our investigations,” he told a local daily on Friday, January 28.

Police also believe that the heist which occurred at the bank’s branch at Westside Mall along Nakuru’s Kenyatta Avenue was carried out by the robbers who had worked in collaboration with the facility’s employees.

All Kenyan Citizens to Get WiFi Connection, Government Declares

DCI Goes International, Here is The Mystery They Have Been Invited to Solve in Another Country