Revealed: Kangogo's parents hand over her Children to their Father 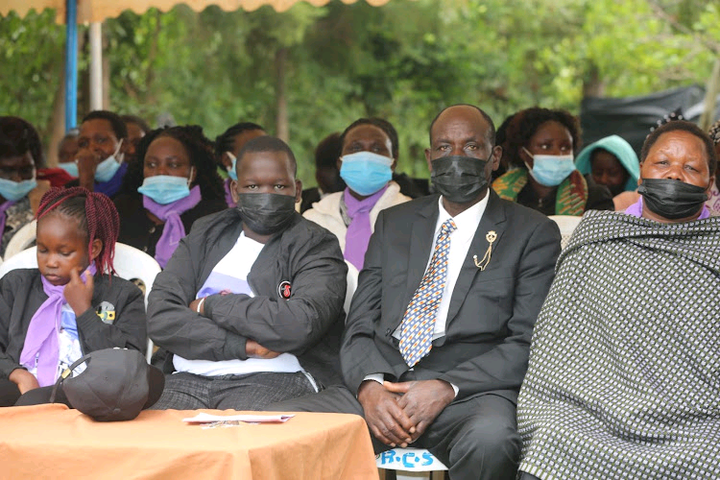 Caroline Kangogo's two children have been given back to her estranged spouse in Kericho county by her family.

A boy aged 11 and a girl aged 7 who had been living with Mzee Barnabas and Selinah Korir in Nyawa village, Elgeyo Marakwet county, were turned over to their son-in-law Richard Ng'eno.

Kangogo had gone underground after being linked to the death of her colleague John Ogweno, leaving the children at home near Kasarani police lines in Nakuru county.

Kangogo escaped the scene in Nakuru town, only to be implicated in yet another murder in Kiambu, where a man's body was discovered in a hotel room with a bullet wound to his skull.

According to a police report, the deceased, Peter Ndwiga, had booked room 107 at the Kimbo hotel around 4:30 p.m. on Monday, July 5.

According to hotel employees who spoke with authorities, the male entered the establishment with an unidentified woman.

Kangogo's parents dispatched one of their daughters to Nakuru to take away the children who had been staying with them for the past two months as a result of the two horrible episodes.

According to Selinah Kibor, the deceased officer's aunt, the family decided to allow the children to rejoin with their father while also continuing their schooling.

“We are delighted to discover that our son-in-law has found an excellent boarding primary school for the children in Kericho county, where they can study without interruption,” Kibor added.

Kangogo's husband Ng'eno kept a quiet profile at her funeral two months ago, which was attended by hundreds of mourners.

He turned down the master of ceremony's invitation to speak to the mourners, including Deputy Governor Wisley Rotich, who had come to her parent's home to pay their condolences.

Kangogo was discovered dead in the toilet of her parents' house, which was 40 meters away from the main house.

Her family remembered her as a modest woman and begged the authorities to look into if she committed herself after allegedly killing two men.

"Caroline Kangogo was not the person who was reported in the media, but she was a good person," her brother Mark Kangogo said.

Kibor, the slain cop's father, refuted widespread reports that his daughter was murdered, saying there was no evidence of foul play based on his observations of the incident.

"I don't appreciate it when people keep making these insinuations that she was murdered," he remarked.