By Githuria.co.ke (self media writer) | 16 days ago 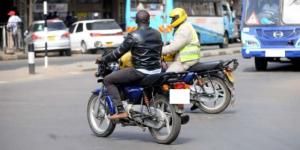 A day after a report on a motorbike stealing racket that has been terrorising boda boda operators in the country made headlines, police have now made a breakthrough in efforts aimed at dismantling the trade.

On Sunday, October 3, a day that the report made headlines, police based in Nairobi and attached to various department led by the Serious Crime Prevention Unit (SCPU), have arrested three suspects believed to be part of the syndicate.

The three, who were smoked out of their hideout in the city, are said by police to be part of a wide net of individuals accused of tricking jobless Kenyans to take loans and buy the motorcycles before executing an elaborate plan to steal the same, plunging the owners into the murky waters of debt and depression.

The racket has over the past one year been accused of stealing over 400 motorbikes valued at about Ksh60 million.

Police detail that parts of one of the stolen motorbikes were recovered in Joska area of Machakos County, just a week after it had been purchased and stolen by one of the syndicate members.

The detectives made the breakthrough after one of the suspects, who had been arrested, led them to the hideout.

The syndicate targets newly purchased motorcycles from boda boda riders, most of whom buy them on credit.

In the border county of Busia alone, 32 motorbikes were stolen between January and September this year, with most loss being through conmanship.

The syndicate reportedly approach jobless youth by promising to recruit them into the boda boda business from where they can get an income.

Some of them even claim that they have a listing on Credit Reference Bureau (CRB) and would like the youth to take the loans on their behalf.

"When they get the motorbike, they take it to Eastleigh, dismantle it and remove the tracker," stated a representative from the National Boda Boda Association.

Ethiopia is the preferred destination for the sale of the motorbikes because when purchasing the commodity, a logbook is not a major requirement.Police have vowed to continue with the crackdown.