By Newsdoctor.com (self media writer) | 3 months ago 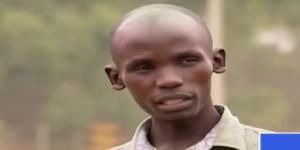 An Uber driver in Nairobi captured the hearts of many after helping an expectant woman deliver at night after hospital staff became reluctant to admit her.

Speaking to KTN News, the taxi driver identified as Justus Nyabuto took matters into his own hand on the night of July 26 when he had taken his client to Mama Lucy Hospital.

He said that he stepped in after he noticed that the woman, Eunice Kimani, was in pain but no one was willing to help him.

He further noted that he was called by an ambulance driver to help transport Kimani to Mama Lucy in Umoja after she could not afford bills charged by a hospital she was seeking admission at in Umoja.

"When the curfew began, I saw that many people faced transportation challenges to and from hospitals. I stay near a hospital and decided to be working even at night.

"I found that mothers and children developed medical emergencies at night and there was no one to take them to hospital," stated Nyabuto.

He noted that when he reached the hospital and sought help from the medics, he was directed to get a stretcher but none of them worked.

"It was around 1:30 a.m. in the night and so we reached the hospital and went to the labour ward. Unfortunately, when I told her to come out of the car, she was unable to walk out.

"I asked for help but the soldier who was on duty asked me to go get a stretcher. I went to the emergency area and there was no working stretcher and you cannot put a pregnant woman on a stretcher," he added.

He noted that one of the stretchers that appeared not faulty was too heavy and when he returned to the patient, she was still on the floor with no help.

Working together with the guard who helped support the patient, Nyabuto helped her deliver the baby.

Eunice disclosed that she was in labour but the nurses had refused to come down to her demanding that she be taken up the stairs.

"He did not leave me. He comforted me and assured that he would help me as much as he would which he did," she stated.

That was the second time Nyabuto, a taxi driver based in Utawala, had helped a woman deliver this year with his last case being in January.

Content created and supplied by: Newsdoctor.com (via Opera News )

Jalang'o Finally Meets Mboya And Gives Him A Stern Warning