By Madexposa.com (self media writer) | 8 days ago

Kenyans woke up to saddening news on Saturday 9th of October after an angry mob torched a 70-year old man's properties before burning him to death in Mberee North, Embu County.

According to reports privy to the heartwrenching account, the root cause of the whole scenario comes after the now dead Agostino Njeru had allegedly demolished his neighbour's house over a perennial land dispute which lead to the angry mob attacking him.

As per reports, the angry mob is reported to have attacked Mr Njeru with machetes, burnt him alive and torched his properties too. Below are few of the photos from the incident's scene; 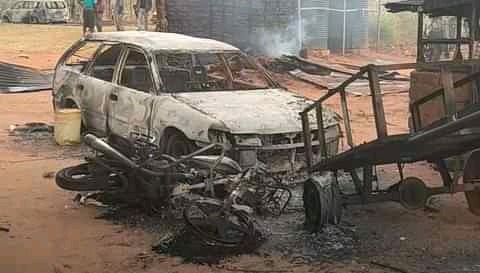 However, Njeru's wife reportedly escaped death by a whisker as she managed to flee to safety thought left with serious injuries to nurse and is currently at Embu level 5 Hospital.

The incident has left many in shock while the authorities have commenced investigations over the matter.

What is your opinion this matter? Do you think such a move was worth it?