"Huyu Anafaa Kushikwa", Reactions After a Woman Is Accused Of Doing This To Her Sister's Daughter

Kenyans have called upon the director of criminal investigation to track and arrest a woman from Nakuru who has been accused of abusing her niece. Taking to his different social media accounts to express his concerns and fear, a Facebook user who has been identified as Nyambati Tom revealed that the child pictured above told him that her aunt has been burning her in attempts to instill manners as punishment.

Sharing a couple of pictures of the victim, Jared revealed that the victim who has been identified living with her aunt claimed that this was not the first time she was doing this. The child showed her several burn marks all of which she says she gets from her aunt whenever she makes a mistake.

Due to this reason, the Facebook user has called upon any government authority to come to the rescue of the kid before things get out of hand because according to him, some of the scars were fresh.

Sharon Wanjiku - This is why I don't ever want to leave my kids behind because I'm afraid of what some of my relatives will do to them.

Patrick Muhia - If I ever catch anyone doing this to my child then I will be going to jail because i would do the same thing to them.

Caroline Nyaboke - I'm always telling my children that the only reason as to why they are treated with respect by my relatives is because I'm alive else.

Judy Ngecha-The woman should just be arrested because this is not something that should be taken lightly.

David Nanjala - Why are we doing this and where is Her mother surely. 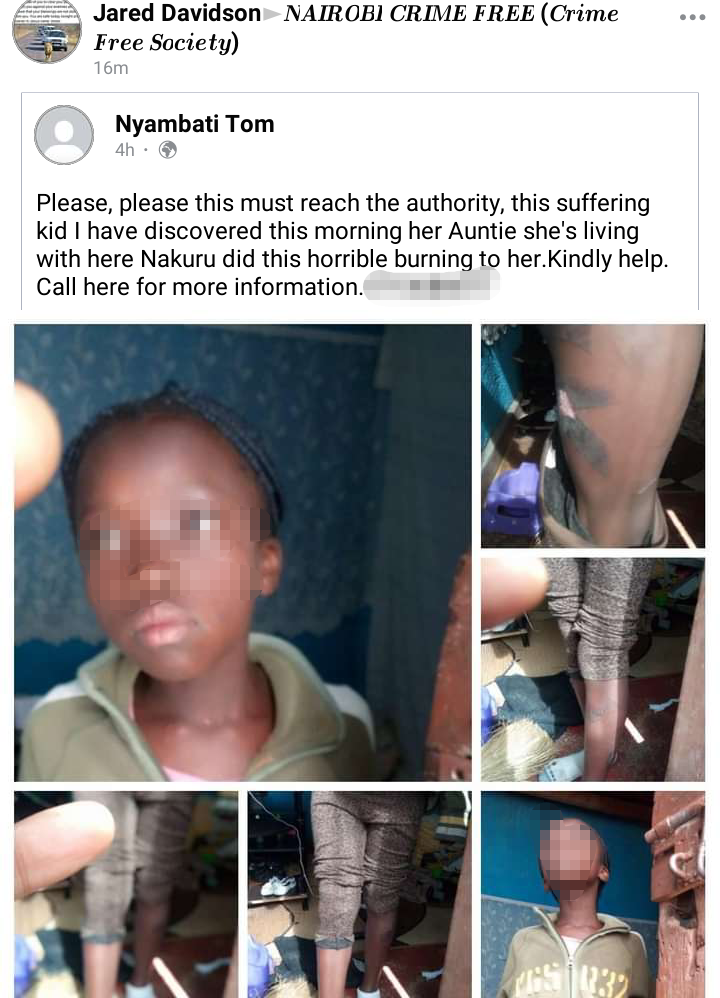