By Wabende (self media writer) | 1 month ago 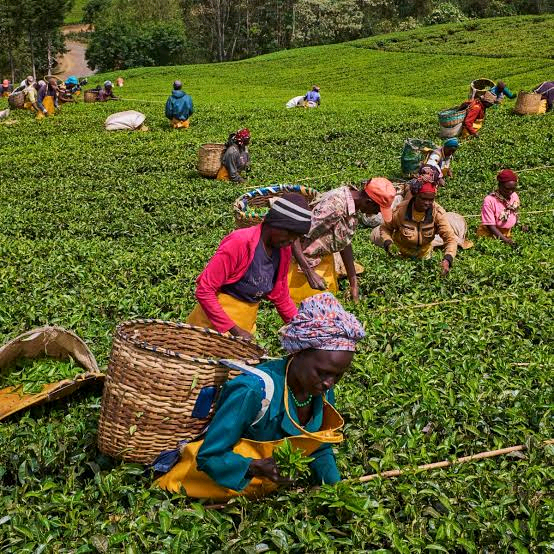 Workers plucking tea leaves in one of the estate. Photo courtesy of pool.

Multi national companies owning tea plantations in Bomet and Kericho are incurring losses running into millions of Kenya shillings due to illegal plucking and theft of fresh green tea leaves.

The vice is orchestrated by villagers who live near these tea estates.Most of them are youths and are school dropouts.

They have given the management of these companies and security sector sleepless nights as they steal both day and night without a care in the world.

Even tea pluckers employed by these companies are affected because sometimes after breaking their backs throughout the day and persevering harsh weather conditions,their input of the day are snatched by these gangs and therefore they end up achieving less kilos and salaries at the end of the month.

At Unilever's Koiwa and Kaptien tea estates the theft of green tea leaves is a common occurrence  in spite of the company's efforts to beef up security including the use of the company security team,contracted security firm and the police.

Here,they strike and steal in the early hours of the morning and at night while armed with pangas,clubs,knives and other crude weapons.They pluck the green tea leaves without putting into considerations the quality because they fear being caught and have no time to pick the quality tea leaves.

These gangs are from Chebwongo and Itare areas bouldering the estate.They operate in a group of five to ten people.They have a recce party group who main aim is to recce where about of the security personnel deployed to guard the estate.

They sometimes post observers in strategic locations overlooking the Koiwa and Kaptien tea estates so that in case of anything the give earning warning to those already in the tea estates stealing fresh green leaves.

During evacuation which is of one the Unilever Tea limited standard safety procedure during a rainfall where all activities are stopped and workers shelter in safe places to avoid striking by lightening.These gangs normally take advantage of this to steal the tea leaves.

Another way the steal is when security personnel are not around due to vastnesses of the tea estates, they strike in a large group while armed with pangs and other dangerous crude weapon and steal already plucked tea leaves from jumbos where the tea leave are weighed before they are taken to factory for process.During the process,the workers normally escape leaving them to take what has been harvested.

At night these gangs that include men and women put on many clothing to prevent coldness,wetness common in these estates located in the highland bordering Mau forest.The gang from Itare area crosses River Itare which voluminously full of fast flowing water and more often cases of bodies found in the river and reported to police are frequent.

According to one of the resident of the village neighbouring the Koiwa Unilever Tea estate,the theft of green fresh leaves has been fueled by high demand due to many private and KTDA owned factories within the area.There are brokers locally refer to as Mongirito who buy from these thieves at a throwaway prices and ferry them to these factories earning handsomely at the end.

Their is also the political side of it.Sometimes they are incited by the political class and activists.They claim that where the tea estates sit were their ancestral lands and were taken from them and rendering them squatters and lack of employment due to scarcities of land to farm and practice agribusinesses for their livelihoods.

Efforts by the security apparatus and members of National Government Administrative Officers(NGAO)that is chiefs and their assistant chiefs.Since some of them are know,they have been profiled as wanted and have been arrested while others still roaming pending their arrests.

Those arrested have been taken to court and jailed or hefty fines are imposed on them in order to deter them and others from stealing the tea leaves.