Panic As Man Dies After Consuming Illicit Brew in Bomet

By RobinMutai (self media writer) | 5 months ago

Illicit brewing in the country was banned several years ago. However, especially in the South Rift, the fight against illicit brewing is far from over. In the past, police officers and chiefs have been colluding with illicit brewers who in turn offer them bribes.

A middle-aged man was on Saturday evening found lying along a local road at Cheptingting area in Konoin Sub-County, Bomet County. The man whose name is unidentified died in what was believed to be excessive consumption of illicit brew. 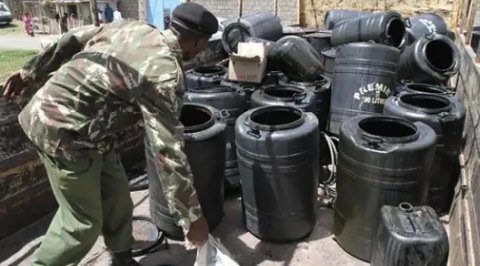 Police Officers from Mogogosiek Police Station arrived at the scene after over an hour later before taking the deceased lifeless body to Kapkatet Sub-County Referral Hospital Morgue in the neighbouring Kericho County.

Last week, a popular platform aired a video traced to an undisclosed location in Bomet County. The video identified an underaged boy staggering and tumbling over severally after consuming illicit brew.

Residents from Konoin have called for the County Government to come to their aid, even as deaths related to illicit brew consumption continue to rise.

Zora: Fila And Lila Confronts Their Father, They Want To Stay With Their other Grandmother