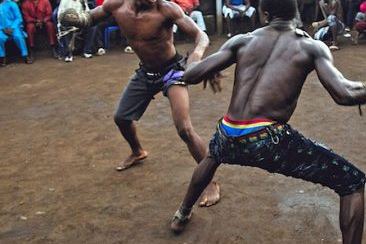 Men engaging in a friendly fight at past competition/Courtesy

Two brothers exchanged heavy blows and kicks over Sh10, with one of them succumbing to the injuries that he sustained during the deadly fight

DCI has confirmed the shocking incident that happened in Nandi Central's Kaminon village after a 31-year-old man was killed by his 28-year-old younger brother.

The two brothers' mother told officers that she heard them fighting at around 6 am in the morning before she rushed there with the hopes of stopping the fight.

Unfortunately, she did not manage to separate them in time. The younger son, Brian Mwale Ilondanga had already cut his elder brother with a panga.

"By the time she trudged her way to separate the combative fruits of her womb, Brian Mwale Ilondanga, 28 (the younger brother) brandished a panga, with which he inflicted life-threatening cuts on his elder brother's face," DCI said.

They rushed the injured man to hospital but their efforts to save his life were futile, he died.

DCI detectives have since arrested the suspect.