By CrimeBuster (self media writer) | 15 days ago

Kenyans have expressed their disappointments and dissatisfactions after seeing a photo of a female traffic police officer receiving a Bribe from the tout of a renowned Psv company. In several photos that has been shared by a reliable source of information, the traffic police officer could be seen receiving what appeared to be an unknown amount of money from a Psv Conductor.

According to the reports given by the Standard media group reporters, they claimed that the police officer allegedly stopped the vehicle for unknown reasons after which she let it go after receiving the money.

While reacting to this incident, Alot of Kenyans have called upon the inspector General of police, Hillary Mutyambai to start the process of prosecuting these corrupt officers.

However, others went ahead and called upon the government urging them to consider giving a salary raise to these police officers. According to the reports given by most Kenyans, they claimed that this is the only way in which the government was going to get rid of corrupt police officers in Kenya.

Catherine Syombua - She should be arrested, this is not good. They're the reason behind the increasing number of accidents in Kenya.

James Muite - Let her do her job. The only way in which the government can get rid of this is by increasing their salary.

Ester Caren - This is a good idea but again, whether or not they are pictured, they will never be prosecuted. I've never seen a corrupt police officer in jail.

Edward Nzive - I don't care what anyone says, let them get what they deserve this is a mutual understanding, he wasn't forced. 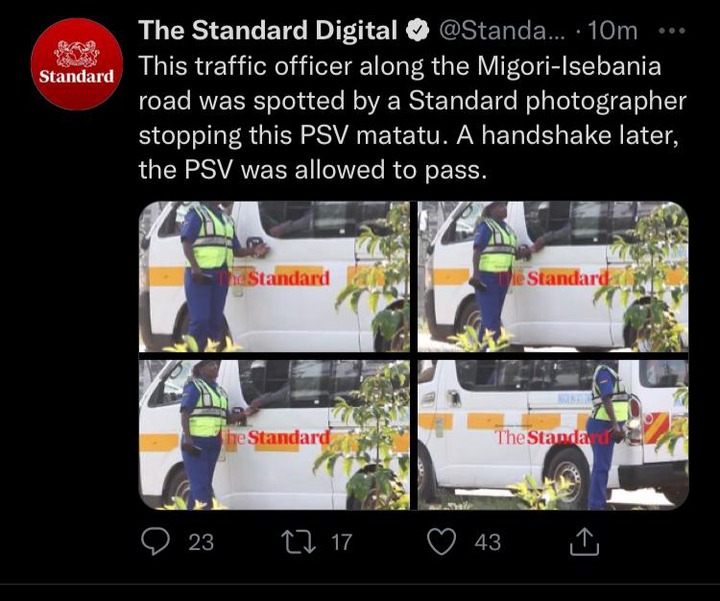