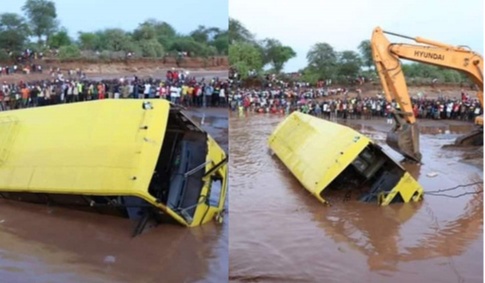 Survivors of the ill-fated bus that plunged to swollen Enziu River in Kitui County last Saturday have intimated what transpired during the tragic incident that has shaken the country.

Speaking to reporters, the survivors intimated that victims in the bus died a painful death. They told terrifying stories about their near-death experiences after the bus was overtaken by raging waters.

The tragedy was captured on video, with screams and wails filling the air as the bus was swept away by the flooded river.

The video, which went viral shortly after the 1:30 p.m. incident, showed brave young men diving into the water in an attempt to save passengers trapped in the bus after it had been submerged. 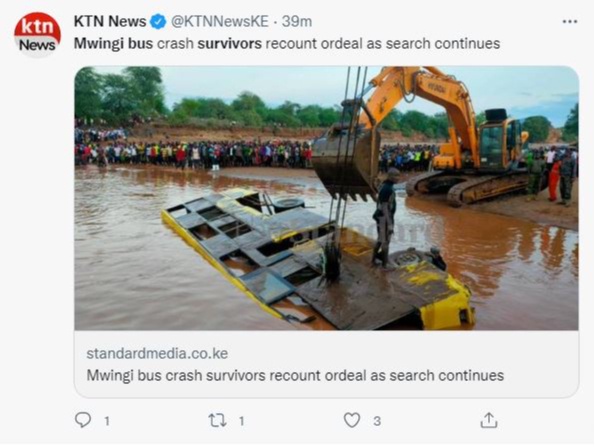 The divers climbed to the top of the bus and began pulling the drowning passengers to safety, rescuing ten people alive.

The bus slammed into the swollen river so quickly, according to two survivors who spoke to the Nation while recovering at Mwingi Level Hospital, that they were submerged within seconds.

One of the choir members who survived, Mr Christopher Musili, described the most harrowing experience as gasping for air and sight in the midst of flowing water.

"I was seated on the right-hand side and was just lucky to be pulled out by the divers," the 27-year-old Mwingi bodaboda rider said.

People were screaming and throwing their hands around aimlessly, he said, with no idea where they were supposed to go.

Could not see anything

"We couldn't see anything," Mr Musili said through tears, "but the passengers were stepping on each other in a desperate attempt to avoid drowning amid flowing waters that were filling our eyes, noses, and ears with sand."

He explained that as the bus was being swept off the bridge, the passengers had no choice because the river was still flooded and they couldn't jump out because the small windows wouldn't allow it.

Many passengers were trapped as they attempted to escape through the windows, and many people drowned in the process, according to the survivor. 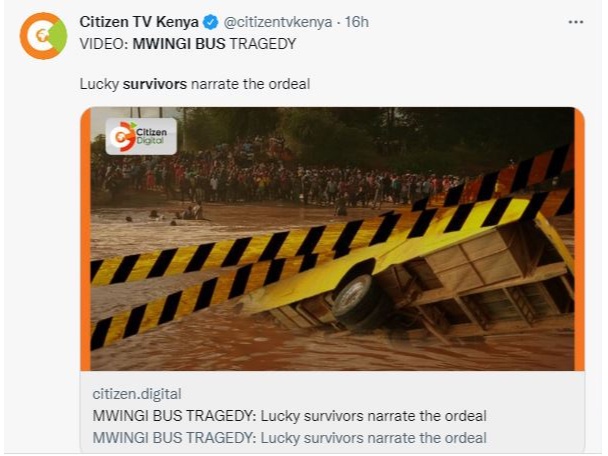 Mr Simon Kea, another survivor, described how the bus landed in a ditch on the bridge's left side edge as it navigated the raging waters.

The bus slid downwards and overturned immediately before being submerged, according to Mr Kea, a nurse at Kyuso's Tei wa Yesu Mission Hospital.

"It was a true death experience. We were all completely submerged in the water. Only then did I feel a hand grab my shoulder and pull me out the bus window. I'm just grateful to God for sparing my life," Mr Kea said. 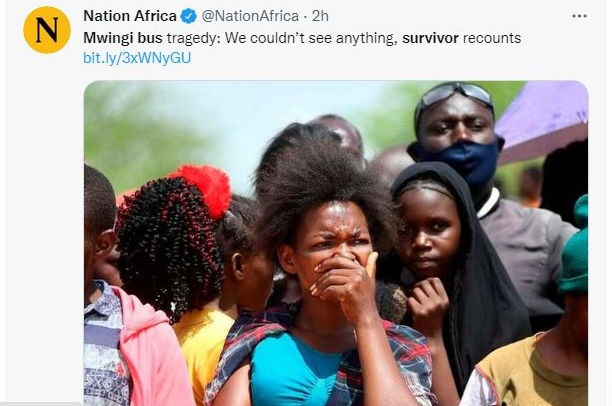 They were rushed to Mwingi Level Four Hospital for emergency treatment after being rescued.

Twelve people were rescued in about an hour, and 20 bodies were recovered from the school bus, including the driver, who had been hired to transport the bridal party to the ceremony.

30 members of the St Cecilia Catholic choir set out to attend a wedding in Nuu, Mwingi town, not expecting their journey to end in tragedy.

They came across a swollen river 3 kilometres from the Nguni diversion off the Mwingi - Garissa road and decided to wait on the banks for the water levels to subside.

They grew impatient as the wait went on. They pushed the driver to take the chance of driving through the eroded drift.

And tragedy struck when the driver gave in to peer pressure and drove through. 25 bodies had been recovered from the river as of yesterday.

The choir had hired Lennox Mbaji, a Mwingi town resident, as a photographer. He was one of the ten people who made it out alive.

When the bus missed the drift and was swept away by the current, he said, chaos ensued, with the passengers desperately screaming for help.

He claimed he reached for the window and broke it to get out, then threw himself into the water and tried to swim.

"I attempted to swim downstream, but the currents were too strong. From his hospital bed, he recalled," I swam back and climbed atop the bus." 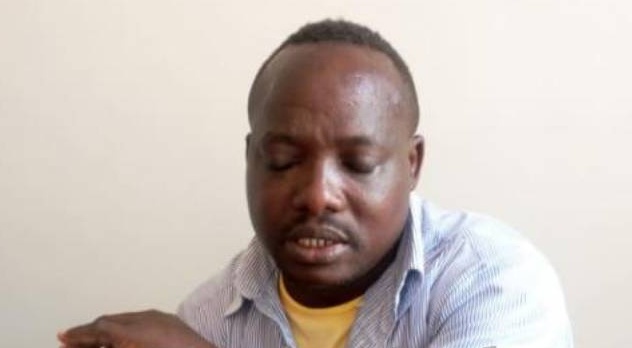 After a few matatus crossed the river, he said the driver was under a lot of pressure from some members.

"They approached the driver and assured him that they would make it because other smaller vehicles had passed through." It was also getting close to the wedding's start time. That's when he made the decision to drive in," he explained.

Another survivor, Regina Kimwele, told the press that she had lost her employer, whom she had been accompanying to the wedding.

She claimed that when the bus overturned, she was thrown into the water and clung to another person who was on the verge of drowning. The divers' quick actions saved her life. 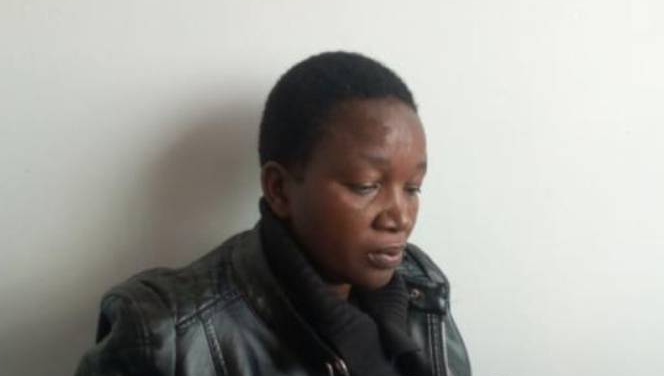 Boss killed with her children

Her boss was accompanied by her husband and three children, according to Kimwele. Along with his mother, their seven-year-old son drowned.

"I'm heartbroken that she and the child were killed. I recognized her as she was being pulled from the water. God has a reason for saving my life because there were so many good people who died there," she explained.

Other passengers from smaller cars joined them in the bus just before it plunged into the river, according to Kimwele. The bus was packed to the brim, and some passengers were forced to stand.

James Kyalo, a member of the choir, was in another ward, with his wife by his bedside.

Could not recall how he got to hospital

He said he couldn't recall how he ended up in the hospital, but that he was sitting in the middle of the bus when the tragedy occurred. He miraculously found himself deep in the water before being rescued by divers.

Collins Aluodo, a choir member, sat next to him and recalled some members breaking into song and dance as they waited for the water to recede by the river bank. 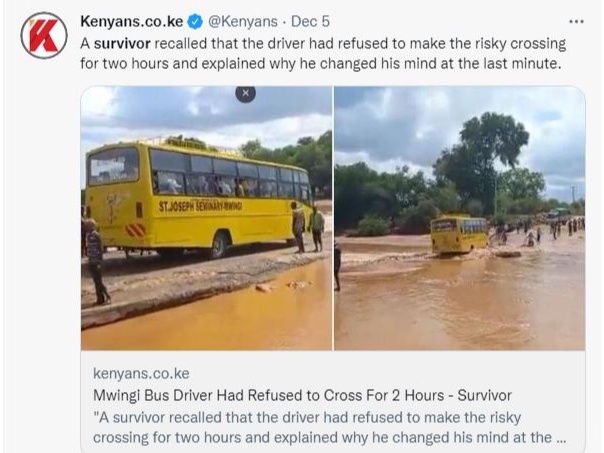 Before rescue arrived, he remembered struggling with the currents and swallowing water.

"That was nothing short of a miracle. It's unfortunate that so many of our members died," Aluodo said.

By 6 p.m. yesterday, the Kenya Defence Forces and the National Youth Service were struggling to pull the submerged bus, which was believed to be carrying more passengers, out of the water.