By Shahhhh (self media writer) | 19 days ago

A women organization from Muranga has raised concerns over the decreasing number of men in the region most of whom are said to have moved to other counties or, dissappeared under unclear circumstances.

According to the reports given by a reliable source of information, it has been revealed that the region is currently experiencing what most might term as men shortage in the region for unknown reasons.

Releasing their latest news on the total population of number of men compared to women, the organization has revealed that the number of men has allegedly decreased by 8,729 adding that they're are currently worried due to the fact that this might affect development in the region.

At the same time, the women's group has added that these cases might continue increasing due to the fact that nothing is being done about it at the moment. Revealing their main concerns, they claimed that their population might also decrease.

While reacting to this incident, a number of kenyans who expressed their different opinions and suggestions on the matter have called upon men from these region to consider going back to their county and take care of this issue.

According to the reports given by these section of Kenyans, they claimed that it was so unfortunate that most Youths tend to abandon their counties in search of greener pastures in other areas instead of making sure they use the already made natural resources in the region.

However, according to the reports given by a number of kenyans who seemed to have knowledge about what might be happening, they claimed that maybe more women were giving birth to more girls compared to boys.

At the same time, they went ahead and claimed that most men from this region might be staying away from making families due to the increased cost of living in the country. 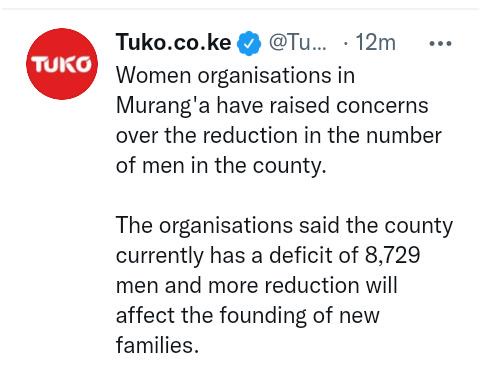 Ruto To Uhuru And Raila: You Must Apologize To Kenyans For Bringing In BBI And Leaving Big 4 Agenda

Blood Thicker Than Water? We Will Not Burry Him, Family Disowns Serial Killer Masten Wanjala