Cases of foreigners allegedly being Killed by locals under unclear circumstances aren't new in Kenya.

The most recent one being the one involving the late Tob Cohen whose body was found in a septic tank.

Coen's Kenyan wife was amplicated in the heineous muder with the case already Underway in the Courts.

However, there are also cases where Kenyans are killed by foreigners and their bodies dumped.

One such a case involves one British soldier who killed a Kenyan girl in 2012 in Nanyuki barracks.

The incident was Investigated by Kenyan police officers until 2019 when they concluded the case without having made any serious breakthough.

However, the hope of getting justice for family of Agnes Wanjiru has been revived after a confession by the soldier himself to a friend.

The friend narrated to Sunday times of UK how the self confessed killer approached him trembling one day and revealed to him how he killled Agnes while in Nanyuki.

Immediately after the confession, the men went to the septic and found the body of the late Agnes floating.

Everybody in the camp was told to keep quiet on the incident and for all this years, no body knew about it until the confession was made.

British embassy in Kenya has brocken it's silence over the matter promising to carryout Investigations together with kenyan authorities with a view to rendering justice.

The confession now will force Kenyan authorities back to the drawing board as they work with their Counterparts in UK to bring justice. 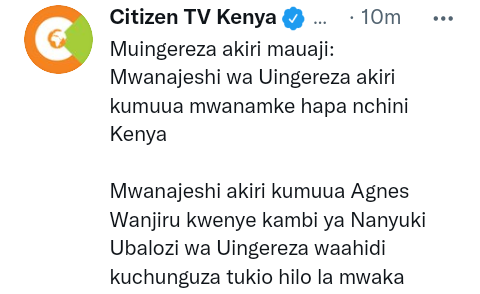 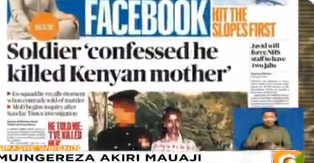