Residents of Baringo have been left puzzled following the mysterious death of a primary school teacher from Baringo who is reported to have been found dead under unclear circumstances a day after his family revealed that he had gone missing. In a news report that has been shared by a reliable source of information, it had been revealed that the deceased who has been identified as 37 year old Stephen Yator was reported missing by his family who filed a missing person's report at the police station for more investigation after he failed to go back home.

According to the reports given by the wife of the deceased, they revealed that they started panicking after he failed to get back home after leaving for work. In her own words, she said that she was chocked after receiving reports that her husband didn't get to school despite the fact that he left in the morning.

"I decided to file a missing person's report at the police station for more investigation after I called one of the school officials who told me that he didn't attend school despite the fact that he left home for work. I haven't seen him for a while now", she said. 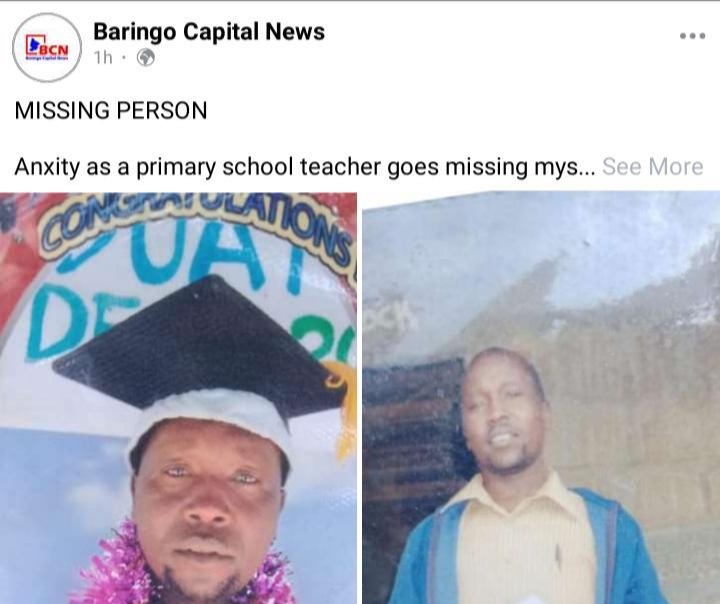 However, according to the latest news about the man's mysterious dissappearance, it has been revealed that he has finally been found dead and dumped in one of the thickets in Baringo. According to the reports given by the same source, they claimed that the deceased who had gone missing for two days was allegedly found dead today in the morning by one of the locals who later alerted other residents.

At the same time, reports have revealed that the deceased was taken to the Mortuary by police officers who are currently investigating this incident in order to find out what happened or rather what killed the deceased.