By Jeropkibe (self media writer) | 21 days ago 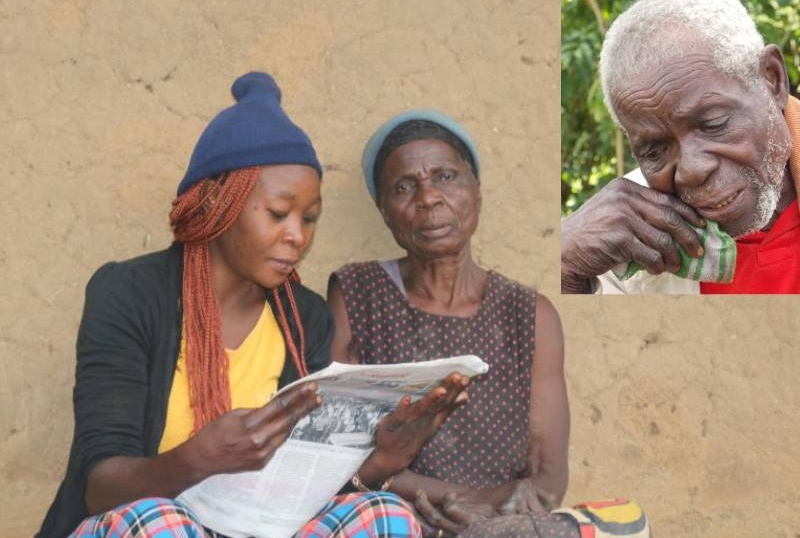 When they say true love never dies, Elmina Mutole lives to prove the phrase right. When her husband Peter Oyuka left her behind 47 years ago, she never stopped loving her. She was 26 years by then.

Oyuka wants her back now after he resurfaced Mutole having have turned 73 years old. She's ready to return, but only after thoroughly considering the consequences of her decision.

“Even though he abandoned me and our three children, he was the husband of my youth. I still have feelings for him,” a sickly Elmina Mutole told a local daily who visited her at her home in Naluchira Village, Malava Sub-County in Kakamega County.

The ageing woman was abandoned while standing tall, walking gracefully and with a near-permanent smile on her smooth-skinned face. But she’s now bowing, has wrinkles and limited energy to go about her daily tasks.

Mutole and Oyuka met at a funeral in Malava on December 12, 1963, and their love story began.

“I was 15 years old then. I loved him instantly, and the following day, he asked to marry me. He was 26 years old at the time,” a nostalgic Mutole told the local daily. 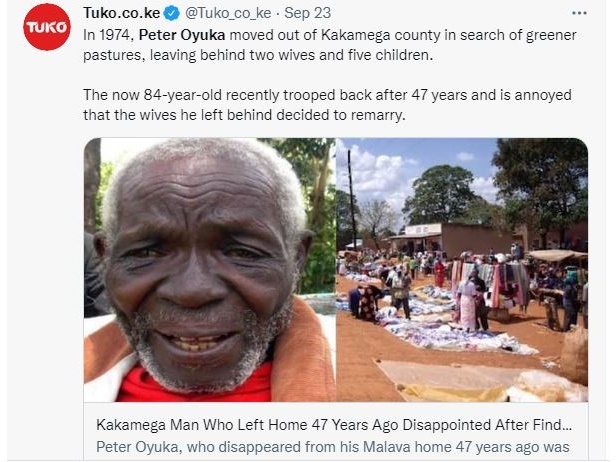 Mutole described Oyuka as a "no-time-waster" as she intimated that he paid Sh2,000 as bride price and handed Mutole's parents two cows in exchange for her hand in marriage.

The couple's marriage was love-imbued, and had all the signs of a long-lasting union, until 1974 when Oyuka went MIA – without a word on where he was going, or when he would be back.

Mutole had already given birth to three children after 11 years of marriage.

“Life became unbearable. I couldn’t comfortably feed my three children. Left with no other choice, I returned to my parents’ home,” she explained.

“After four years of being housed by my father, a suitor sought my hand in marriage. His name was Amakobe Okoti. I married him, and got two children with him. Sadly, he died slightly over ten years ago,” she continued.

In 2002, she returned to Makale Village in Malava Sub County, her first marriage home, to see her three children, whom she had abandoned.

First husband learnt of the visit

Peter Oyuka, her first husband, learned about her visit and traveled to Kakamega to see her.

“He asked me to get back with him, but I refused. I told him that I had found a new partner, who loved me so much.

“He pleaded, promising to take me to Tanzania, where he was working at the time. I stood my ground, and reminded him that I was happily married, and that I’d lost interest in him,” she stated.

Mutole is now widowed, sickly and elderly. And when asked whether she’d consider reuniting with Oyuka, Mutole said:

“I would first tell him sorry for returning home while sickly. He abandoned me when I was young, and needed a man in my life – to love, pamper and take care of my bodily needs,

“Making matters worse, he completely cut off communication with me. Today, he’s returned, saying he wants me back. I’m now sickly, old and have a blurry vision. If I have to get back with him, which I’m not ruling out, I have to really think through it,” she said.

Learnt from the media

Mutole added that it was one of her youthful daughters (from the second marriage), who informed her that Oyuka had been quoted in a section of the media saying he wanted to reunite with her.

“I was taking lunch on Thursday, when my daughter said that she had read about my ex-husband’s plea. I felt bad, when she informed me that my former spouse had returned home while ailing. I loved him, and despite what happened, I still harbour feelings for him, 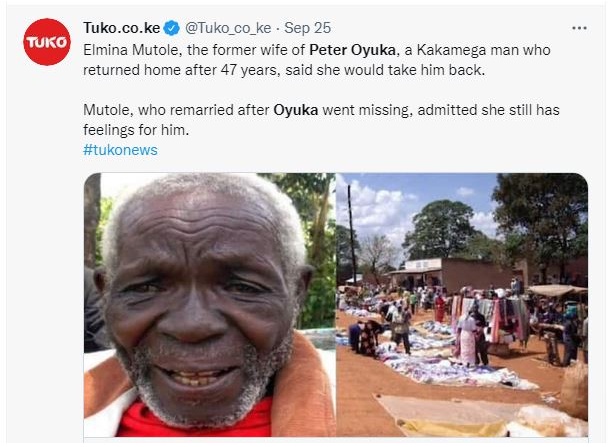 “For three days now, I’ve been unable to eat properly, knowing that the man I once loved is not in good health. We shared many good moments, and it pains me that he is unwell. His weaknesses notwithstanding, Peter was a loving and caring man,” she narrated.

According to her daughter, Martha Salano, she doesn’t mind if her mother reunites with Oyuka.

She said that her mother and has the right to choose who she wants to be with adding that when she and Oyuka met, they weren’t there.

“My mother deserves to be loved, just like any other woman. And, how she reacted to news of Oyuka’s poor health tells you that she’s still in love with him,” she said.

But for 35-year-old Salano, Mutole’s daughter-in-law, Jacqueline Mudanya, she would oppose any reunion attempts between Mutole and Oyuka.

“We’re capable of looking after her. A man cannot abandon you for 47 years, return and walk into your life like nothing happened,” she said.

According to a local daily, Oyuka was married to two women, when he left home in 1974.

Peter Oyuka was saddened on September 21 when he learned that his two wives, whom he had left behind 47 years earlier, had remarried.

Oyuka left his Makale Village home in Malava, Kakamega County, in 1974 and only a few neighbors recognized him when he returned over five decades later.

He said he left the hamlet for the city in the 1970s in quest of a well-paying job to support his two wives and five children. 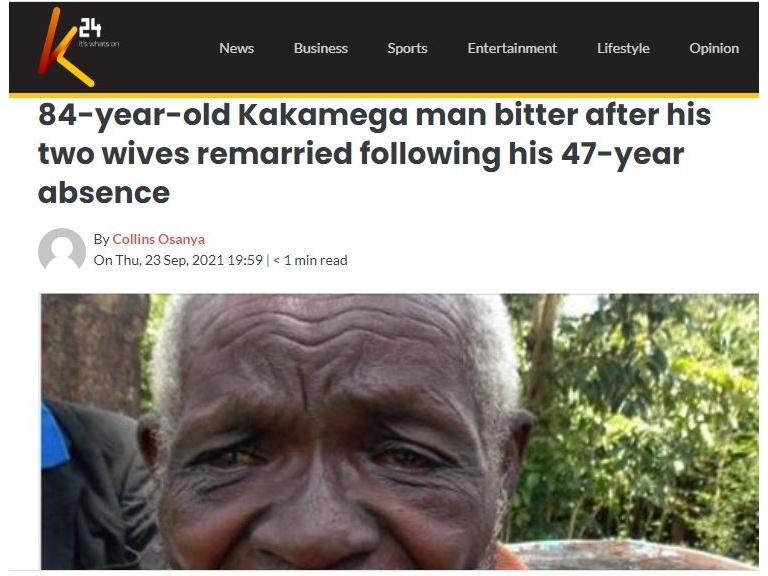 His wives, who were left alone and despondent after Oyuka abandoned them in 1974, chose to remarry.

“I wish my wives were here today to welcome me home,” Oyuka said on Tuesday, shifting his expression from pleasure to regret, almost instantly.

Actually, one of Oyuka's daughters-in-law mistook him for a trespasser.

To welcome the prodigal son home, rituals were done. To appease the ancestors, a white goat was sacrificed.

In 1974, at the age of 37, Oyuka left Kakamega for an unidentified urban center in search of a well-paying career. He kept his wives in the dark about where he was going and when he would return.

A Facebook post by a Good Samaritan in Oloitoktok, Kajiado County, requesting leads to Oyuka's relatives would prompt his return home.

“I have been in Nairobi, Oloitoktok and Tanzania a better part of the 47 years,” Oyuka told a local daily.

The old man said he’d been engaging in construction work for a living.

“I worked for an Indian businessman in Nairobi, before being transferred to Tanzania, where I spent 13 years,” he stated.

And while in the neighbouring country Tanzania, Oyuka fell in love with a female Tanzanian national, with whom he sired a child.

“After I returned to Kenya years ago, my Tanzanian lover stopped communicating with me, and is yet to allow me to meet our son,” he stated.

He now confesses that he is “heartbroken” after learning that his wives in Kenya remarried after his disappearance.