Domestic Drama as Mother And Daughter Fight Over Lover

By Felicis.Marshall (self meida writer) | 15 days 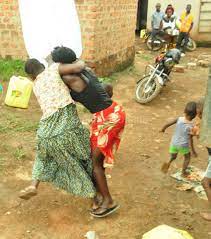 Residents of Kileleshwa, Nairobi County have been left in utter shock and disbelief after a domestic drama broke out between a youthful mother and her daughter. The young woman battled her mother after she discovered that she was having a romantic relationship with her boyfriend.

According to the Kenyan newspaper Taifa Leo, the mother was discovered to be having an eye on her daughter's boyfriend after they were caught in a compromising situation in the house. This led to a domestic altercation between the mother and her daughter who exchanged words and blows.

The daughter confessed that it was not the first time her mother had taken her lover from her as there were other previous instances with different men. However, Taifa Leo reported that this time round the daughter vowed not to let it happen again.

"What sort of mother are you if you force me to give up on my lover just because you have fallen for him? Last year I welcomed a white guy in the house and you took him away from me. I am exhausted and you'll see what I'm made of this time round," the angry and allegedly heartbroken daughter stated.

The fight between the two escalated until it attracted the neighbors who come to witness a free drama, in the meantime the man who was in the house at the time of the fight disappeared into the thin air.

What do you think about this incident? Feel free to share your thoughts and opinions in the comments section below.

RIP: A 13-years-old Student Allegedly Commits Suicide After Losing This Amount Of Money

Sad Story Of A Mother With Two Uteruses, Hole In The Heart And No Private Parts

Here's The Last Sense to be Lost While Dying