Several women from Kisii have called upon President Uhuru Kenyatta to reconsider returning the night time curfew claiming that his order to lift Curfew was going to break their marriages due to the fact that their husbands were going to start sleeping outside.

In an incident that happened yesterday, President Uhuru Kenyatta who addressed the nation during the Mashujaa day celebration revealed that he had lifted Curfew that had been put in place a year ago in order to curb Covid-19 infections which was becoming rampant.

"With the power given to me and as the president of the republic of Kenya, I would like to announce that the Curfew that I had put in place ends today", President Uhuru said.

Expressing their concerns after President Uhuru's remarks, two women from Eastleigh have called upon President Uhuru Kenyatta wanting him to return the Curfew orders stating that they were going to start sharing their husbands with other women.

"We would like president Uhuru Kenyatta to return Curfew because in as much as most Kenyans are happy, we are not because we don't want to start sharing our husbands with other women. We were happy the way we were and now they will be sleeping outside claiming that they were out with friends. We are not safe", One said.

While reacting to this claims, kenyans who took to their different social media accounts to express their opinions and suggestions on the matter have called upon these women wanting them to tame their husbands or rather, talk to their husbands to avoid this drama.

According to the reports given by most Kenyans, they claimed that most men can't be told what to do adding that they needed to talk to them like grown ups in order to avoid this kind of things. 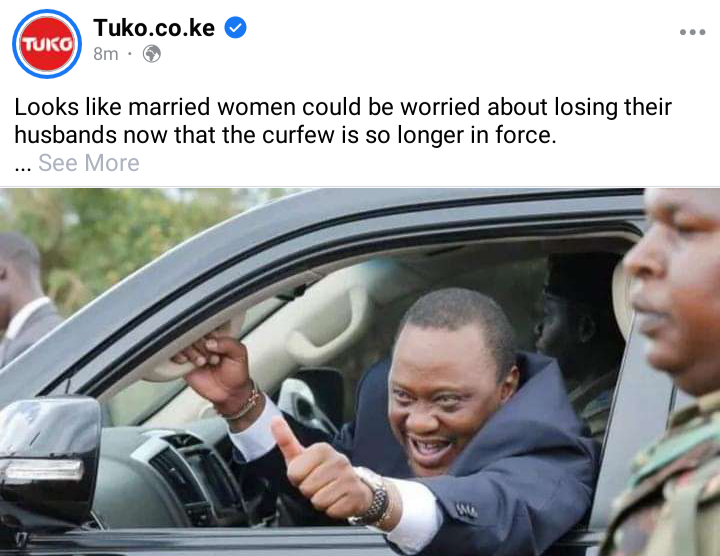