By Jobwanjala (self media writer) | 6 days ago 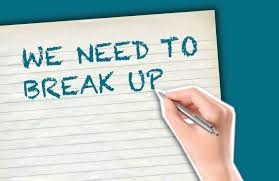 Breaking up with someone, whether you’re on the sending or receiving end, is one of the hardest things we have to experience in life emotionally. Though obviously not pleasant, most people experience this at some point in their lifetime. When things just aren’t working out and you aren’t the match you thought you were, it’s time to move on. But before you do, there’s something that has to happen.

Having this conversation in person might not exactly be something you’re looking forward to, so consider writing a letter to breakup instead. We know what you’re going through right now isn’t easy, so we’re here to help. Here are a few tips to help you get started.

There is literally nothing more of a slap in the face during a breakup than receiving a text message, email, facebook message, or whatever messaging route informing you of the breakup. If you really can’t muster up the courage to break up in person (and that’s a seriously hard thing to do, understandably!) then the next best thing is to sit down and write a letter. Not type. Write it. Just do it. Not only will it feel good to let your thoughts flow onto the paper, but it will give your ex just that one last physical piece of your relationship to have. It can be a tool that helps them grieve, whether they decide to keep it to read it over and over, or if they choose to burn it along with all of your other memories. Writing a letter helps you both.

If you’re trying to break it off on good terms, then you definitely want to watch the tone of the letter. Emotions can easily get the best of us, but if you’re really trying to get them to not hate you, then you need to be sincere. Don’t give false hope by saying “I need a break” or anything along those lines, because it sends mixed messages to your ex that there’s still a chance. Say what you mean and mean what you say!

For instance, If you did something to upset them before this whole breakup started, instead of writing “I’m sorry you feel hurt by my actions,” write “I’m sorry that what I did hurt you.” 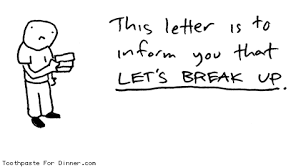 Don’t be wishy-washy during a breakup. Don’t say things that allow it to drag on (and then wonder why your ex won’t leave you alone…) Clarity is one thing that helps people to heal from the breakup and is often sought after during the grieving process.

If you’re breaking up, there has to be an explanation, some kind of reason, no matter how big or small you view it. You are writing a breakup letter, so let it be the last one to put the relationship to rest! Explain why and give details. Give them so many details that they can’t possibly have any questions about what is happening! Breakups are brutal enough, but to have loose ends and a million unanswered questions… that can be torture to someone! So please, just explain why.

Is there a next or is this the end-end? Do you want to be friends still? Do you want them to keep away for good? Will you be going into the house and removing your things or theirs? Do you have pets or mutual belongings that need to be divided? If there’s anything to come next after this letter that you’re writing, it should be stated in the letter. Any kind of future contact, how you would like you two to communicate (if at all), anything involving you two needing to be in touch should be brought up in the letter.

7.Thank Them for the Memories.

Your real name. Not any pet name that you went by, nothing that will remind your ex of you two being together, but your real name. You’re ending the relationship and you’re ending the letter that’s ending the relationship. Keep it “strictly business,” if you will. Avoid valediction that you’ve used previously in love letters, such as “love always” or “sincerely yours,” and stick with a basic “sincerely” to wrap it up.

This is one of the most difficult letters I've ever had to write. There has been a lot of tension since our argument, when I tore your Nehru bag. I am sorry for tearing it, I know how important it was to you.

Unfortunately, it also made me aware of my feelings. I feel like you care more for your clothes and accessories than you do for me. It is for this reason that I've decided we should break up.

I do want to thank you for being there for me when I was new to Mumias. I will always appreciate the time we spent together and hope we can remain friends.

Truth is, no matter how you end it, it’s going to put you both through a whole spectrum of emotions, all of which are normal. There’s always the chance that they will hate you no matter what you say, because everyone handles a breakup differently. The wrong thing to do is to stay with someone because you’re afraid to hurt them. If you truly don’t want to be with them, the right thing to do is to break it off, because otherwise it’s not fair for either of you. They’re going to feel what they’re going to feel, you just have to accept it for what it is. Trust God (or the Universe, or whatever suits your faith) and move forward.

Breakups are always done at the comfort level of those who are ending the relationship. Sometimes especially in instances where one's safety is at risk it is best not to have an in person breakup.

I would however not put too much emphasis on explaining why. Closure is overrated. Having someone run down a list of your perceived flaws or shortcomings is essentially asking to be slapped across the face as your future ex walks out of the door.

Oftentimes when you make it about (them) it only causes them to beg, plead, and make promises to change or suggest couples therapy. If you have already made up your mind (it's over) leave it at that. Simply telling someone you're unhappy and have a desire to move on with your life is telling the truth without pointing fingers.

It makes no sense for anyone to try to "fix them self" for their (ex).

The traits you dislike about someone could be the very ones which cause another person to fall madly in love with them!

Ultimately you're breaking up because you realize he/she is not "the one" for (you). It happens. That's life!

Lastly don't worry about what your (ex) thinks about you.Such thinking causes a lot of people to offer friendship as a "consolation prize" in order to avoid feeling like the "bad guy".

This in turn causes their ex to hold out hope for a possible reconciliation because they believe by remaining close to you there is a chance. Sometimes exes find themselves having sex on occasion. While the person who was dumped may believe it's a sign they're getting back together the other person may view it as a "friends with benefit" or "booty call" event. Now they're hurt again!

The best friendships between exes usually occurs after a large gap in time whereby both people have emotionally moved on and found new loving relationships with other people.

Thanks for stopping in, reading my article and leaving your thoughts.

God is Great, Another Senator Comes in Handy For The Viral Chips Lady