Fears and Promises That Might Shape Central Kenya's Direction in 2022 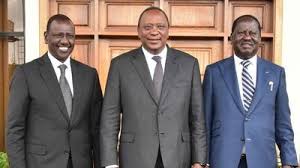 Central Kenya is like a father having a ripe girl. The girl want the plums but the father always reminds him, "You need to wait until the plums are ripe before you pick them." Palms are husband with interest to marry her when the time comes. Plums here are the suitors trying to outdo each other in impressing her.

In 1938, Jomo Kenyatta wrote a book, "Facing Mount Kenya." The book indicates that if two or more men were interested in a girl she was asked to chose the partner herself.

In voting day, voters are to determine the promises and fears made to them during the campaign period. Ladies fall to a man depending on their fears and what the suitors promised them including lies.

Politicians promise each region what they would like to do if elected. One fear that whoever becomes the president is interfering with the region's economic livelihood.

Coffee is the world's traded commodity after oil. This fear goes beyond the region political violence in Rift valley where central kin settled that is still haunting them.

Due to encounter with 'Mzungu' has resulted to improvement in health and hygiene has led to population boom.

The region is predominant of single parenthood leading to social-economic crisis. The current and even the next president will not revolve the region's crisis overnight. This is what is believed to make the region more politically vulnerable.

The two suitors see visiting regularly to the region is DP Ruto and Raila Odinga. Whoever between the two who will get the deputy from the region could get lots of political mileage. One of them is seen to choose a woman, guess who?

It is feared that political history might work against the two suitors. Jomo Kenyatta and Odinga feuded over political direction soon after the independence. However, their sons are making peace, will the peace persist into Raila's presidency if he wins?

During Moi era, Central region had only one Minister. This is something some of the leaders firm the region are hearing could replicate if Ruto takes power.

Between now and August 2022, Central region will remain a theater of political activities. But some believe including myself that a clear political direction will eventually emergency. What about the surprise the president talked about some years back?