Did You Know? In Space, Flames Behave in Ways Nobody Thought Possible

By WolrdExplorer (self meida writer) | 14 days

When you lit a fire on Earth and in space, they will not be the same at all. When you lit a fire on Earth hot air rises while cold air replaces hot air, this is called buoyancy. In places where gravity is low, there will be no buoyancy from flames. The image below shows when the flame burns on Earth , it has a pointed tip unlike when it burns in space. When it burns on Earth is has a pointed tip as seen below. 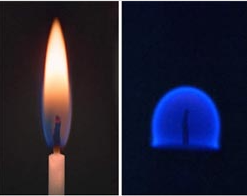 It is so bad when there is a fire outbreak in space since fire will spread in any direction. Someone will say that it is not possible to have fire in space. But remember we are talking about space stations. In space stations, we have ventilation fans which work the same way as providing almost the same as natural convection and also can supply air that is enough to support burning.

Content created and supplied by: WolrdExplorer (via Opera News )