By NewGlobeMedia (self media writer) | 1 year ago

Seismologists professional experts in the DRC have reported 61 earthquakes, around the Mount Nyiragongo volcano, which had erupted 7 days ago, and have warned residents to keep away from lava flows in that area near Goma.Also they went ahead and warned that lava flows could cause human displacement. 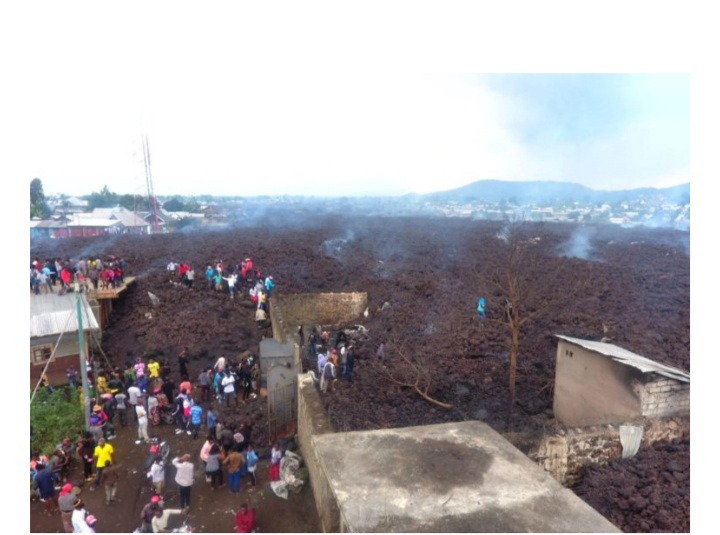 This information was outlined in a daily report presented for the government by the Goma Volcanic Observatory . It is also explained that the volcano crater continues to collapse for sometime and contributed to the earthquake and caused ash emissions.

The Seismologis in DRC have also found that 11,500-foot-high volcano sits around approximately 9 miles from Goma, in a city with an population of around 670,000.

One of the government spokesperson that around 400,000 people on Friday had vacated the city mainly because officials warned of a second eruption.There was fear because the first lava explosion had killed at least 31 people.

From the first lava explosion the area has experienced a frequent earthquakes and tremors.In addition to Rwandan citizens in Kigali could feel it, more than 100 km from the volcano in the Virunga National Park.People in the areas of lava flows warned that it can cause loss of property,human displacement, asphyxiation, severe burns or even death.

However,it warned that as magma continued to move through a fissure to Lake Kivu there was a high possibility of a limnic eruption and eruption under the lake could cause occurrence of debris and emit toxic gas. That could worsen the situation in the area,mostly for human survival.

The residents around were warned to keep distance If lava erupts in the Kivu River, because the explosions could produce dangerous ballistics.Also there was fear that a volcanic eruption, landslide or large earthquake could destabilize the lake’s deep waters and emit some harmful gases.

Some report,further warned that gas emissions are likely to become more frequently in the coming months. This is due to increase in volume of underground magma in the area.The report also showed that fissures could release lethal concentrations of gases hence emphasised that people should keep away from the area.

Content created and supplied by: NewGlobeMedia (via Opera News )