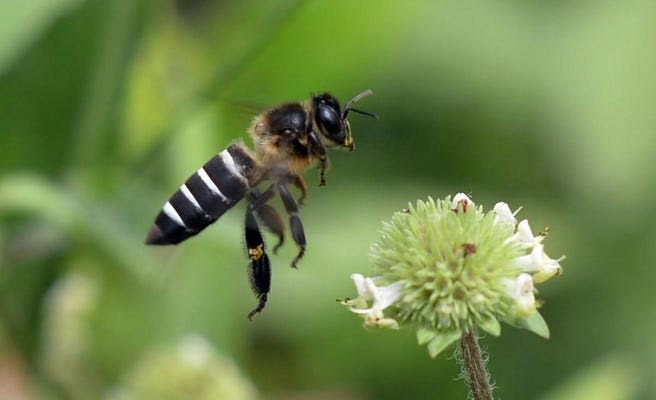 There are four different ways of answering a “why” question in science and the other answers all hit on the different answers. So let’s combine everyone’s work:

Mechanistic answer: the honey bee worker’s stinger is barbed, and sticks in human skin. It doesn’t stick in all animals, though; a honey bee could sting a large insect, for example, and pull out her stinger safely. But for humans and other mammals with thick skin, the stinger gets stuck. When the bee tries to escape after stinging, she will inevitably break off her rear end and possibly disembowel herself and die.

Adaptive answer: the stinger is a hollow needle, but attached to it is a venom sack. When a bee stings, she injects venom through the needle. This venom is a nasty cocktail of poisons: chemicals to break down the cell membrane and cause pain, anti-inflammatories to stop blood flow that would otherwise clear out the toxins, histamines that give you the allergic reaction symptoms, and even pheromones that signal to any bees in the vicinity, “We are at war! Come, sister, and sting here too!” The sack is attached to the stinger, so when a bee dies after stinging, her venom sack is often left behind, still pumping poison into your skin. You are stung once, but get multiple doses, so it’s not a total tragedy for the bee.

Ontogenetic answer: did you notice I was only using female pronouns for the bees? That’s intentional, because only female bees can sting; the stinger is a modified ovipositor, or egg-laying tool. Worker bees seem to be born knowing what to do, and sting instinctively. I doubt they know their stinging will be fatal. All that matters is to get rid of whatever is attacking the colony, and stinging works. Since workers do not reproduce on their own, they are giving up their own lives so the queen and any new reproductives can survive to lay eggs in the future. Queen bees can sting too, but their stinger is not barbed and they can actually sting you multiple times without dying. They are not likely to sting the average person, since they rarely leave the hive and usually just sting rival queens coming to usurp the throne (ideally before they have finished their pupation…”Game of Thrones” has nothing on bee politics).

Phylogenetic answer: the gender is important for another reason: female bees are more closely related to their sisters than to their own children. That’s how such altruism evolved: a bee’s genes survive better in her sisters than her kids. This works because bees are “haplodiploid.” What that means is that females have two copies of every chromosome, but males only one. Males are produced by unfertilized eggs. You may have learned that humans have 23 pairs of chromosomes (46 total), and one pair are the sex chromosomes: XX for women, XY for men. A female bee will have 16 pairs of chromosomes (32 total), but the male only one copy (16 total). The female sex chromosomes are XX, but the male is just X.

Content created and supplied by: Dekuzman22 (via Opera News )

"My Mom And Bro Bewitched My Dad And Sold His Land, They Hate Me Because Of My Skin Color:Lady Tells