By Gknight (self media writer) | 21 days ago 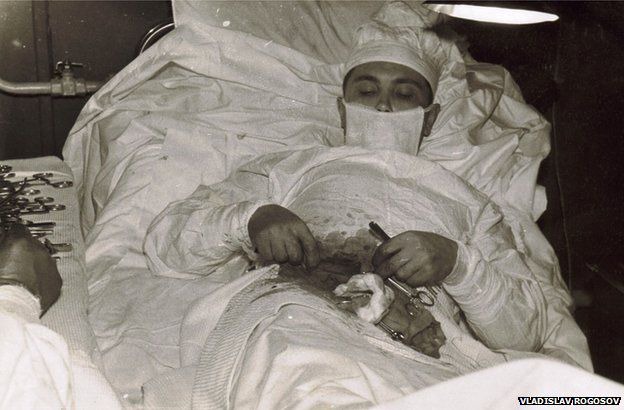 Leonid Rogozov ( pictured above) was a Soviet general practitioner who took part in the sixth Soviet Antarctic Expedition in 1960–1961. During an expedition to the Antarctic, Russian  Rogozov became seriously ill. He had woke up feeling weak, and ill and also had a strange pain in the right side of his abdomen. The severity of the pain and the localized swelling, could only mean appendicitis. The man needed an urgent operation and as the only surgeon around, he realized that he had to do something close to impossible, Leonid had to operate on himself to survive. The operation started at 02:00 local time on the first day of May with the help of a driver and meteorologist, who were providing instruments and holding a mirror to observe areas not directly visible, while Rogozov was in a semi-reclining position, half-turned to his left side. The surgeon took a break after 30-40 minutes due to fatigue and also body weakness brought about by the bleeding. After a 45 minutes long surgery procedure, Leonid was finally able to successfully remove his severely affected appendix. He applied antibiotics to prevent infections in the peritoneal cavity and closed the wound. Those who were helping him took photographs of the operation constantly as this was a real historic moment. The surgeon had finally succeeded in saving his own life. “I worked without gloves. It was hard to see. The mirror helps, but it also hinders—after all, it’s showing things backward. I work mainly by touch. The bleeding is quite heavy, but I take my time—I try to work surely. Opening the peritoneum, I injured the blind gut and had to sew it up. Suddenly it flashed through my mind: there are more injuries here and I didn’t notice them… I grow weaker and weaker, my head starts to spin. Every 4-5 minutes I rest for 20-25 seconds. Finally, here it is, the cursed appendage! With horror, I notice the dark stain at its base. That means just a day longer and it would have burst and… At the worst moment of removing the appendix, I flagged: my heart seized up and noticeably slowed; my hands felt like rubber. Well, I thought, it’s going to end badly. And all that was left was removing the appendix… And then I realized that, basically, I was already saved”. Leonid narrated. Within two weeks, he had fully recovered and went back to his normal duties. He was later awarded the Order of the Red Banner of Labour in 1961. Rogozov worked as a medical director at different institutions for most of his life. Between 1986 to 2000 he served as the head of the surgery department of Saint Petersburg Research Institute for Tubercular Pulmonology. Rogozov would later die in 2000, aged 66, in Saint Petersburg, Russia, from lung cancer having added almost 40 years to his existence. His story remains to be one of the most inspiring stories over the history of medicine as it shows a lot of determination.