What Raila Will Do to Fulfil Uhuru's Quest of Uniting him With Mudavadi, Kalonzo

By TheDailyOnlinePunch (self meida writer) | 12 days Lately, it has been said that president Uhuru Kenyatta is pushing for the coming back together of former NASA principals ; ODM's Raila Odinga, Wiper's Kalonzo Musyoka, ANC 's Mudavadi and Ford Kenya's Wetangula to give Ruto a man's fight come 2022's fight for Statehouse.

As the general elections near, the drift between Raila and his former allies continues to widen. Many analysts and president Uhuru Kenyatta's defenders have insisted that the former NASA Principals must reunite in order to a chance against Ruto come 2022. 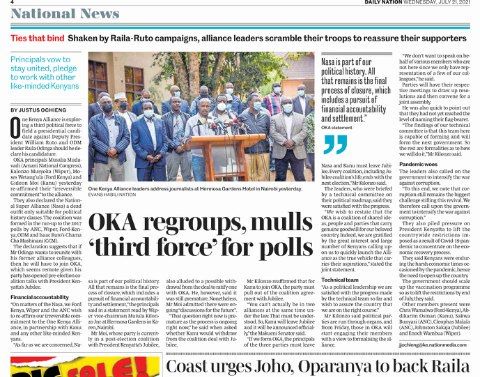 From OKA's yesterday speech, it has now clearly emerged that the trio won't be looking back for a NASA revival. They said that NASA is already a dead political bull only suitable for political lessons. The trio reaffirmed their irreversible commitment towards the newly formed OKA.

The declaration indirectly suggests that if the team stands a chance to reunite, it's Raila who must join OKA alliance since Mudavadi, Kalonzo and Wetangula have vowed not revive such a coalition that they claimed will soon be forgotten after 2022 elections.

If Raila humbles down and agrees to join OKA, his bitter friends will let go of the hate and anger towards him as a result of his belittling. Currently the team feels shameful to rejoin NASA and work with Raila because they feel Raila is a boastful political mogul who doesn't acknowledge others.

This is the only way that Raila will succeed in getting back his friends. A recent statehouse meeting between president Kenyatta, Kalonzo and Raila to try resolve their differences didn't bear fruits despite the two promising the president that they would meet to talk and eliminate reunion barriers.

The team reaffirmed that Gideon Moi will soon leave his coalition agreement with the Jubilee party since it has no life past 2022.

A Man In Zambia Was Charged K 10,000 After Doing The Following To A Girl

What is Beard Shaving Profile in the Military?

'Uwii,' Mange Kimambi Reacts To Tanasha Donna's New Shape Revealing How She Got It

No NASA No Problem: Raila Gives His Rivals A Morning Shocker As His New Plan Is Leaked To The People