By Clemarks (self meida writer) | 1 months

Solar panels parallel connection and batteries with automatic ups system twelve volts installation is best because the current is accurate.

Most solar panels and batteries come in 12 volts, 24volts and 36 volts etc. If you want to add extra capacity to the system, you will have to wire the system in parallel configuration. Suppose a single battery powers up a ceiling fan for 6 hours. The same fan can be powered up for 12 almost double hours by two batteries having the same capacity connected in parallel. In addition, the two parallel connected solar panels will charge the batteries quickly and power up extra load.

This parallel wiring configuration is needed in case of 12 volts system such as 12 volts charge controller and inverter system. For this reason, two or more solar panels as well as batteries each of 12 volts direct current are connected in parallel.

Point to note is that we may also wire multiple solar panels and batteries in parallel for 12 volts, 24 volts, 36 volts or 48 volts direct current systems depending on our requirements.

Same is the case for batteries such as that we can increase the ampere hour capacity of batteries when connected in parallel.

While the voltage of battery as well as solar panel remains same parallel connection.

Such 12 volts for both twelve volts solar panels and batteries.

Note that the amperes hour capacity of batteries as well as voltage level of solar panels must be the same for all batteries while connecting them in series or parallel.

The voltage level from both batteries and pv panels remains 12 volts while higher amperage capacity. We can connect the power generating pv panel and energy storage as backup in batteries with the 12 volts ups or inverter and solar charge controller. 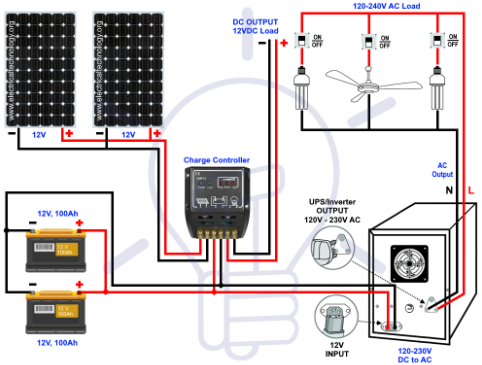 During shading or night when there is no generating power from solar panels, the battery stored energy will be used as a backup power and it will power up the alternate current load via inverter. This whole process is automatically done through ups such as it is hassle free and no manual action or changeover or automatic switch is needed to switch on or off electrical appliances and breakers.

Gov. Kibwana Breaks Silence On Raila, Kalonzo War, Reveals The Details Of The Agreement Between Them

Revealed: The Written Promise Raila Made To Kalonzo Musyoka In 2017 About 2022

Huge Blow To Uhuru As Kieleweke Is Alleged To Be Planning To Do This, If Raila Merger Succeeds