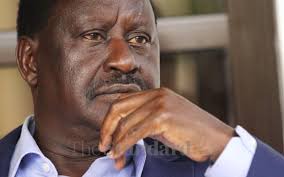 The entire NASA Coalition fraternity has found itself in another direction after ODM Party Leaders decided to quit the camp.The ODM party leaders have reached this decision after other party principals dismissed the quest of uniting with ODM Party ahead of the 2022 general elections.

On the other hand,it is a Sigh of relief on the official quitting of ODM Party from the Nasa Coalition.This is because other NASA principals will have another good and high time of trying their level best in Clinching the top seat but not to leave for one person.

Since it was put into the agreement in 2017 general elections that ODM party leader should vie for the presidential seat in 2017 and relinquish it to others come 2022,the ODM Party leader was seen as he was not ready to relinquish the seat to his fellow co-principals.

Therefore Raila's decision of quitting NASA camp is something not to get worried about but something to feel appreciable.This is now clear that the other NASA principal can determine their potential for succeeding president Kenyatta when he comes out of office.This is after Raila Odinga tried it but he received a broad daylight challenge in the previous conducted elections.

Kenyans and Nasa principals have now another good time and opportunity to challenge Mr Odinga that with or without him Nasa can move on and rule Kenya.With other co-principals Mudavadi can scheme and have a broad daylight challenge against Mr Odinga come 2022.But Mr Odinga's dismissal quest brings a ray of hope to NASA principals for ruling Kenya.

Content created and supplied by: Bilal254 (via Opera News )