How space suits work and their components

By Kirigwi_Arnold (self meida writer) | 23 days 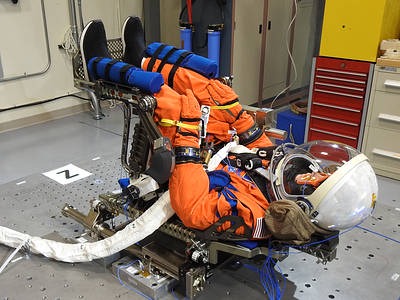 Spacesuits are much more than a set of clothes astronauts wear. However, like a set of clothes, different suits serve different purposes. Space exploration usually includes two different kinds of spacesuits, both of which protect astronauts from the dangers of their mission. One kind is worn inside a spacecraft during launch and ascent to space, and again on the way home during re-entry into Earth's atmosphere as well as during landing. The other kind, described here, is designed specifically for spacewalks. NASA calls a spacewalk an Extra-Vehicular Activity, or EVA, so this type of suit is often called an EVA suit.

A fully equipped spacesuit used during spacewalks is actually a miniature spaceship shaped like a human body that protects the astronaut from the dangers of being outside a vehicle while in space or on the Moon. Spacewalking astronauts face radiation, dust, debris, and extreme temperatures. Temperatures on spacewalks may vary from as cold as minus 250 degrees Fahrenheit to as hot as 250 degrees in the sunlight. The suits provide the proper pressure for the body and supply astronauts with water to drink and oxygen to breathe.

The spacesuit worn for spacewalks outside the International Space Station is called the extravehicular mobility unit, or EMU. NASA is currently developing a new suit that will be worn for spacewalks on Artemis missions called the Exploration Extravehicular Mobility Unit, or xEMU. It includes several new features and technological advances, but the suits share most of the same basic elements that work together to keep crew members safe and healthy while allowing them to accomplish their tasks when working outside their spacecraft in harsh space environments.

The first piece of a spacesuit that astronauts put on is a special cooling garment made of a stretchy spandex material and water tubes. About 300 feet of tubes are woven into this tight-fitting piece of clothing that covers the entire body except for the head, hands and feet. Chilled water flows through the tubes near the spacewalker’s skin to regulate body temperature and remove extra heat during the spacewalk, which typically lasts multiple hours. Vents in the garment draw sweat away from the astronaut's body and help with circulation inside the spacesuit garment.

The hard upper torso is lightweight but strong and connects the inside of the suit with the appropriate systems in the portable life support system. It is shaped like a sleeveless shirt and connects to the arm assembly that covers the arms and joins the gloves. The upper torso of the new exploration suits will have a rear-entry hatch to allow astronauts to climb into the back of the suit.

Astronauts must be able to work with and pick up objects while wearing spacesuit gloves. Gloves protect astronauts from the space environment and are made so spacewalkers can move their fingers as easily as possible. The fingers are the part of the body that gets coldest in space, and the gloves on spacesuits are equipped with heaters to keep fingers warm while still allowing dexterity to use tools.

The lower section of the suit is made up of spacesuit pants, boots and the lower half of the waist closure. A piece called the waist bearing helps the astronaut move and turn. A metal body-seal closure connects the lower torso to the hard upper torso. On the new suits that will be used for lunar surface missions, the lower torso includes advanced materials and joint interfaces that allow bending and rotating at the hips, bending at the knees, and hiking-style boots. With this new mobility, astronauts will be able to walk on the lunar surface, instead of doing the “bunny-hop” developed by Apollo moonwalkers.

The flexible parts of the suit are made from as many as 16 layers of material. The layers perform different functions, from keeping oxygen within the spacesuit to protecting from space dust. Closest to the astronaut's skin, the cooling garment makes up the first three layers. On top of this garment is the bladder layer that is filled with gas to create proper pressure for the body and holds in the oxygen for breathing. The next layer holds the bladder layer to the correct shape around the astronaut's body. The ripstop liner is a tear-resistant layer. The next several layers are insulation and act like a thermos to help maintain the temperature inside the suit. The white outer layer reflects heat from the sunlight and is made of a fabric that blends three kinds of threads. One thread provides water resistance, another is the material used to make bullet-proof vests, and the third component is fire-resistant. Some suits are plain white and some have stripes to help tell one spacewalker from another.

On the back of the spacesuit is a backpack that houses the supplies and equipment to make the suit work. This backpack contains the oxygen that astronauts breathe and that pressurizes the suit. A regulator in the backpack keeps the suit at the correct pressure. A fan circulates oxygen through the suit and life support system where the carbon dioxide that astronauts exhale is removed from the suit. The backpack provides electricity for the suit and holds a two-way radio for communication. The backpack also contains water for the cooling garment, a chiller to cool the water, and a pump that circulates the chilled water.

Historically, a communications cap is worn under the astronaut's helmet that contains earphones and microphones. The cap connects to the radio on the spacesuit and enables the astronaut to talk to other crew members and mission control. The communications cap is sometimes called the Snoopy cap for its resemblance to the aviator cap worn by the cartoon character. The new explorations suit includes an upgraded audio system inside the helmet that does not require the astronaut to wear a cap. The integrated communication system has speakers mounted inside the helmet area and multiple embedded voice-activated microphones that automatically pick up the astronaut’s voice.

The helmet on spacesuits built for spacewalks serves as a pressure bubble and is made of strong plastic to keep the pressure of the suit contained. It also has a ventilation system that provides astronauts with oxygen. Helmets also contain a small foam block that astronauts can use to scratch their noses. Outside of this bubble is a protective visor that keeps the pressure bubble from getting bumped or scratched. On top of the protective visor are the sun visor and sun shades. The sun visor has a special gold coating that works like the astronaut's sunglasses. Together, the movable sun visor and sun shades protect the astronaut from the sun's strong rays, while still allowing a clear visual field. The helmet on the suits that will be worn for Artemis missions will feature a quick-swap protective visor that protects against the abrasive dirt of planetary bodies. The helmet for these new suits also features an elliptical shape that provides a better view of the ground around the spacewalker's feet.

Content created and supplied by: Kirigwi_Arnold (via Opera News )

8 Body Changes That Should Never Be Ignored