Who was Mordecai in the Bible?

By Selftheagent (self meida writer) | 10 days 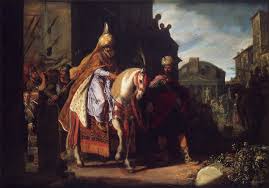 During the reign of Ahasuerus, Mordecai was a Jew living in the Persian city of Shushan (Xerxes). He is probably most remembered for being Queen Esther's uncle and for his key part in King Ahasuerus' administration.

The name Mordecai might be derived from either Hebrew or Persian. The word is made up of two elements in Hebrew: mar, which means bitter, and dak, which means oppressed or crushed. Mordecai denotes severe oppression or crushing when used together.

Mordecai is a Persian word that means "servant of Marduk" (a Persian god), "worshipper of Mars," or "small man." Keep in mind that Mordecai was no "small man" when it came to his beliefs, as he aided in the preservation of the Jewish nation.

Mordecai, the son of Jair, was a member of the Benjamin tribe and had ties to Kish, King Saul, and Jonathan. Paul the apostle, Esther, and Ehud are among the prominent Benjamites. Judges 20:16 also cites a particular group of 700 left-handed Benjamites who could hurl a stone without missing a target by a hair's breadth.

Mordecai is described as sitting faithfully at the king's gate multiple times in Esther chapters two through five. Mordecai was promoted to Prime Minister after Haman was expelled from power. Mordecai's first move as Prime Minister was to overturn Haman's recent "law" calling for the annihilation of all Jews in Persia (Esther 8:9,10).

Mordecai's value system was not dictated by circumstances or self-preservation. He refused to bow to Haman because he believed that only God should be revered (Esther 3:2). Even as Haman grew increasingly enraged by Mordecai's acts, he remained to bow to God alone.

Thousands of clay tablets carrying official documents of the Persian empire were discovered by archeologists in the 1930s. Marduka or Marduku, Babylonian meaning Mordecai, was a high-ranking governmental official who worked in Shushan during the reign of Ahasuerus, according to these cuneiform tablets. (Vol. 1, pp. 436-43 in On the Way to the Postmodern: Old Testament Essays 1967-1998).

Isn't it fascinating that Mordecai is listed not only in the Bible but also in the Persian empire's official records?

Content created and supplied by: Selftheagent (via Opera News )

Why It Is Important To Have White Vinegar In Your Home